THE EVOLUTION OF THE BUSINESS CARD

- From simple calling cards, to advertising, to pins. 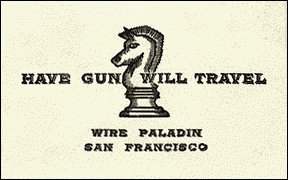 Years ago I happened to see a copy of Amelia Earhhart's business card. It was actually quite simple and included nothing more than her name and title, "Aviator." There was no address or anything else, and I suspect it was used merely to introduce her to people, a "calling card" if you will. In an old CBS western starring Richard Boone, the main character also had a simple business card which included a reference to his line of work, "Have Gun, Will Travel," along with "Wire Paladin, San Francisco." Also included was an image of a chess piece, a knight to be precise, presumably a symbolic touch of class.

Business cards today are much more sophisticated than those of yesteryear. Although most are still wallet sized, there are many new avant garde designs and shapes which force the recipients to somehow address the information on the card. In other words, business cards have gone beyond merely identifying a person and providing contact information, it is now an important part of a company's advertising strategy. Some cards are larger and quite eye-catching, but if I cannot fit it in my wallet or business card case, I will likely discard it, as I will consider it unprofessional, but that's me.

As I've mentioned in the past, the exchange of business cards in Japan is a very serious and formal affair requiring protocol. Americans tend to treat it more frivolously and pass out cards as if they were dealing a hand of poker. Such disregard says a lot about a person who probably suffers from minor social dysfunctions, such as introductions and handshakes.

Not surprising, the business card has evolved from elegantly simple to horribly complicated. I find it rather amusing when a person has so many electronic addresses, yet you still cannot contact them (they refuse to answer the phone or respond to messages). Maybe they should just have a card like Amelia Earhhart's.

We used to keep and carefully file business cards for future reference. Not so anymore. People usually enter the data in their address books and discard the card. This can be done either by keying the data or by scanning the card and transferring the data using optical character recognition technology. Even this is changing though as smart phones are embracing barcodes such as the QR code (Quick Response) which is a matrix-like graphic that can store data in a small space. A person can simply scan the QR code and transfer the data to an address book. The image is so small, not only can they be printed on business cards but will eventually make the business card obsolete. Instead, you will likely wear a small pin containing the image which can be easily scanned.

The pin somehow sounds nice, but I think I'll miss the proper exchange of business cards and the value we once placed in them.


NEXT UP:  SLIPPING INTO A NATIONAL DEPRESSION - And how the Tango can help.

Also look for Tim's postings in the Palm Harbor Patch, The Gentlemen's Association, and throughout the Internet.
Posted by Tim Bryce at 5:52 AM