- You can run, but you cannot hide from the beast. 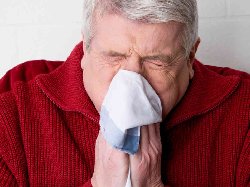 I hate colds. I can usually sense when they are coming on, be it in my throat, nose, eyes, ears, or even lips. I immediately take some preventative medicine. Sometimes it works, sometimes it doesn't. If the cold really wants to bloom, I find there is no stopping it. I believe it has a mind of its own. I can go a long time between colds, but when I finally get one, it's usually a real beaut.

When it comes, I tend to slow down, get some rest, and try to be a good patient. I do not like to take a lot of medicine but I'll do as my wife prescribes. She can also make a mean "Hot Tottie" which includes lemon, honey, whiskey, and hot tea. It usually knocks me out and, if I'm lucky, I can sweat the cold out of me. My latest cold converged on my head and throat. Luckily, it avoided my chest. I took various remedies to clear my sinuses, and they worked rather well, but they wouldn't knock the sniffles completely out. I loathe having to blow my nose every five minutes which, of course, becomes rather irritated and sore.

I attend quite a few meetings during the week and in doing so I have to meet and greet a lot of people. As is customary, I offer a handshake to people, but when I have a cold I don't want to pass it on to others, so I awkwardly do not extend my hand and inform them I'm suffering with a cold. People are glad you tell them so, but the expression on their face gives me the uneasy feeling that I have somehow contracted the plague. I find it rather amusing how people automatically take a step backwards when you inform them you have the slightest suggestion of a cold. It's like a reflex action, sometimes followed by a handkerchief or hand sanitizer (just to be safe).
The Japanese seem to be more sensitive to the transmission of a cold. Since most people over there make use of mass transit and are in close quarters with many others, a person experiencing a cold will typically cover his mouth with a surgical mask. Others wear it simply not to contract a disease from others. Whereas Americans seem to relish in sharing their misfortune, the Japanese try to minimize the effect of a cold. I tend to believe the Japanese are more considerate in this regard.

If my cold goes on too long, I find I have to take matters into my own hands. Since the beast won't take the hint to leave, it's time I show him the exit. This is when I finally introduce it to the smoke and fire of a good cigar, and strong drink, such as Scotch whiskey. I've done this on more than one occasion and believe it or not, my cold starts to run and hide, eventually succumbing to the smoke and alcohol. In a way, it acts like a farewell party, which is perhaps what the cold had been waiting for before it departs.

Actually, I believe we always have a cold within us, but I think it waits for the right combination of elements before it raises its ugly head. Perhaps it is a drafty room, exhaustion, or some food combination. Whatever the magical recipe is, the cold emerges from its den in an ugly mood and searches for a weak body part to attack, and the cycle starts all over again.

The only good part of a cold, at least to me, is knowing that I have a date in the offing with a fine cigar and a glass of Scotch. It has the added nuance of making me feel like a lion tamer.


NEXT UP:  THE EVOLUTION OF THE BUSINESS CARD - From simple calling cards, to advertising, to pins.

Also look for Tim's postings in the Palm Harbor Patch, The Gentlemen's Association, and throughout the Internet.