- And the means by which leaders persuade their followers. 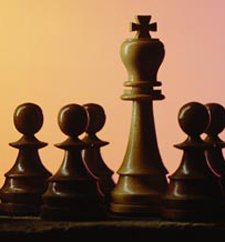 The concept of leaders and followers is as old as mankind where one person champions a path for others to follow. Leaders believe they possess the knowledge and skills to take their followers to the promised land. They do this for several reasons: compassion for others, ego, greed, or it is simply their job to do so, as in business. Followers are searchers, be it for knowledge, truth, direction, or because they have no alternative. People will follow leaders either willfully, reluctantly, or by coercion, such as by threat of punishment. It depends on the follower's perception of their leader. They either have confidence in the leader's ability and trust his judgement without question, they lack confidence but are willing to follow, or are resigned to their fate.

Perhaps the single biggest attribute of a leader is his/her ability to motivate the masses to action. Religion holds the best examples of such leaders including Jesus, Muhammad, Buddha, other religious prophets, and members of the clergy. In the business world, people like Ford, Rockefeller, Carnegie, Edison, and others reshaped the world. In American government, people like Washington, Jefferson, Lincoln, and the Roosevelts had a profound effect. Even dictators like Hitler, Mussolini, Castro, and many others rose to positions of power mostly through their skills of oratory, along with some persuasive military force behind them.

For this to work properly, followers must become subordinate to the leader; this can be done either through some friendly persuasion, fear of force, or some other means, and herein is where politics is born. Leaders must use various techniques to inspire their followers, be it logic, trust in judgement, an appeal to their emotions, or a whip and a chair. To cement people's perceptions, propaganda is used. Leaders have an intuitive appreciation for the power of propaganda, some more than others. Controlling both the message and the media by which it is communicated is imperative so followers will not deviate from the leader's message or vision. The media, therefore, is the Kool-Aid the masses must drink.

Recently, famed newspaper columnist Bob Woodward and television commentator Lanny Davis were taken to task by the White House for some of their comments considered critical of the President. Both were threatened in some form as a means of retribution, something considered alarming even by the media supporting the president. This is a considerable departure from the past. For example, even in the tense and dark days of Watergate, there is no evidence the Nixon administration threatened Bob Woodward and Carl Bernstein who were credited for blowing the whistle. Presidents are certainly not happy with everything written about them, but the First Amendment guarantees freedom of speech which, in theory, provides a shield to protect the press.

During the 1930's-1940's, the White House convinced the media not to photograph FDR in his wheelchair as they didn't want to depict America's leader with a disability. The press obliged. This was trivial in nature compared to the tactics now being implemented to manipulate the media. In addition to sharp criticisms, we are now hearing about such things as revoking press corps privileges, gag orders, censorship, discrediting people, and blocking news organizations not in line with White House policy.

It would appear, an organized department of dirty tricks or propaganda is in effect in the executive branch. If true, this goes way beyond fair play and dangerously into a constitutional controversy over the First Amendment. The 2012 Amber Lyon/CNN incident is indicative of the control the government is trying to exercise. One thing is for certain, how the press operates today is unlike the Watergate years. Journalists are being kept on a short leash for political purposes. The result is a press coerced to follow White House doctrine and not allowed to deviate from it. It is not so much that the main street media is biased, as much as they are being controlled by the government. By towing the White House's line, the media is just the Kool-Aid the president needs to manipulate the masses.

"Journalism is printing what someone else does not want printed. Everything else is public relations." - George Orwell

To many, leadership is about control and how much he/she wants to exercise it. It appears we now have a different type of leader in the White House, one who acutely understands the power of the media, and knows how to manipulate it to serve his purposes. However, as many American politicians have discovered over the years, if the leader leads with an iron hand, his days are numbered, unless he has a strong military to back him. Americans like a benevolent leader, one who knows how to work out differences with the Congress as opposed to being confrontational. Recent examples include Bill Clinton working with Newt Gingrich, and Ronald Reagan with Tip O'Neill. A president can dictate terms when his party controls both chambers of Congress, but he has to compromise when another party controls a part of the government, as the GOP currently does in the House. Confrontational tactics, such as accusing blame and smearing reputations, has never proven to be effective to promote compromise. Then again, maybe the president is not interested in compromise.

Unlike his predecessors, it appears President Obama intends to blame the GOP for the country's woes and hold himself blameless. This is part of a long-range strategy to discredit the Republicans in order to re-take the House of Representatives in 2014, thereby giving him carte blanche to do what he wants in his last two years in office. Such tactics are unlike anything we have witnessed in recent memory. To do this though, the President will rely heavily on his control of the media to sell it to the masses.

What is unsettling is the prospect that this may be the first President to never pass a budget during both his terms of office.

Somehow I am reminded of the old Rolling Stones song, "You can't always get what you want" (But if you try sometime, you just might find, You get what you need). What the country needs is a leader who knows how to get the job done and not allow the country to stagnate.

Also look for Tim's postings in the Palm Harbor Patch, The Gentlemen's Association, and throughout the Internet.