- Why my visit to the dentist was like digging the English Chunnel. 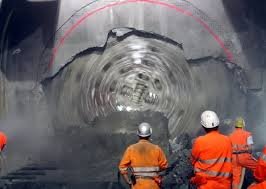 Aside from a few fillings when I was young, I have been blessed with some rather good teeth. Year-in and year-out I've dutifully visited my dentist for cleanings and have kept them in good shape. On a recent visit though, my dental hygienist found I had broken a back molar thereby requiring a crown. To dentists, this is like hitting pay-dirt as I discovered crowns can be an expensive proposition. It's not uncommon to pay in excess of $1,000 for a crown. Fortunately, I was covered by dental insurance, which brought the out-of-pocket expense down considerably, but I was mindful how expensive the procedure can be. Many years ago, it wasn't too expensive, but inflation and the technology of the 21st century changed all that.

On the day I arrived for my procedure, the dental assistants began with a battery of preparations before allowing the dentist to work on me. I was asked to bite down on a big wad of Silly Putty in order to make an impression of my teeth. Whatever it was, it actually tasted like the famous polymer I played with years ago. As I bit into it, the suction of the putty was so strong that it seemed it was extracting every filling in my mouth. When they pulled the final impression out, I was relieved to see none of the fillings were attached.

Next, they used a long cotton swab to apply Novocaine to deaden the senses around my molar. Years ago I remember the dentists used a long ominous looking needle to apply Novocaine. To a little kid, the Novocaine needle could be terrifying. So much so, people preferred using "Laughing Gas" ("Nitrous Oxide") as opposed to facing the needle. I'm glad someone invented a simpler and less threatening means for applying the local anesthetic.

The next step was to insert a variety of things in my mouth, such as rolls of cotton to provide a buffer between my cheek and gums, and a massive piece of plastic to pry my mouth open at a specific angle allowing the dentist easy access to the tooth in question. It felt like a miniature sawhorse and worked just as effectively. A breathing tube was added, along with suction to draw my saliva away.

The dentist then made his appearance and after a few pleasantries, he applied some microscopic lenses to his glasses, which looked like a couple of Bic pens, and thus he began using a whirling drill to sand down my molar. The drill proved to be very effective and I listened carefully as he whirled and chiseled my tooth down to size. A couple of times I could see smoke coming from my mouth. My eyes must have expressed alarm as the dental assistants quickly assured me my mouth wasn't on fire, that it was just a little steam. Since when does steam smell like burning flesh? I could have easily lit a cigarette if I wanted to. I persevered nonetheless.
As I sat there and let the dental staff have their way with me, it occurred to me the operation had turned into something resembling the digging of the English Chunnel. There were workmen with lights and safety glasses protected by barricades and sawhorses as they drilled down into the cavern. Lines were inserted to pump air into the chasm and water out of it. The analogy was so strong, I had the unsettling feeling I was being worked over by the Department of Transportation as opposed to a medical team.

After much work, the molar had been trimmed to size and a temporary crown put into place using a caulk gun which seemed appropriate for a construction job. As the dentist finished, the assistants cleared my mouth of debris and equipment and traffic resumed. I just hope they picked up all of the cigarette butts. As I was leaving, I didn't know whether I should just thank the staff or take them out for a beer afterwards.

I still have the final crown to be fitted and inserted, but this shouldn't be as big of a job as the Chunnel. It was an interesting experience and I think I can now relate to those friends of mine who have had an inordinate amount of work performed on their teeth. In the end, all I can say is, "Thank God for Novocaine."

THE DEATH OF PROFESSIONAL COURTESY - What ever happened to "The Golden Rule"?

Also look for Tim's postings in the Palm Harbor Patch, The Gentlemen's Association, and throughout the Internet.
Posted by Tim Bryce at 5:30 AM