WHO IS REALLY ABOVE THE LAW?

- Is there an inconsistency? 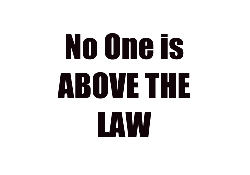 Throughout President Trump's impeachment trial in the Senate, the prosecuting House Managers reminded us several times, "Nobody is above the law, particularly the president." It became the mantra of the Democrats while litigating the case and, if anybody defied them, they were criticized as unpatriotic and accused of lacking any common sense.

Actually, I do not have a problem with the basic concept and accept the notion, "Nobody is above the law." Unfortunately, this is simply not so as we have watched the super-rich and power-elites elude prosecution many times over the years. For example, money has kept members of the Kennedy family from getting into trouble on more than one occasion, starting with Ted Kennedy at Chappaquiddick. I am still at a loss as to how the Clintons have avoided prosecution over the years. The reality is, if you have the money for the best attorneys and/or hold political strings, you really can be "above the law."

Recently, because of the Senate trial of the president, Sen. Bernie Sanders (I-NH) was unable to spend time in Iowa, the highly contested site of the first presidential caucus. Consequently, he sent Rep. Alexandria Ocasio-Cortez (D-NY14, aka "AOC") to Iowa to campaign on his behalf while he attended the trial. During her stumping for Sanders, AOC told voters the senator stood out because he was in favor of breaking up Immigration (ICE) and Customs and Border Protection (CBP). She said, "Sen. Sanders is the only candidate to commit to breaking up ICE and CBP."

Democrats have long been known to support open borders, as they represent new voters to support them. Further, the controversial concept of Sanctuary Cities, as offered by metropolitan areas controlled by Democrats, provides a safe-haven for illegal immigrants. This establishes an inconsistency by Democrats claiming illegals are "above the law."

If the Democrats truly believe nobody should be "above the law," they would dismantle the sanctuary cities and assist ICE and the CBP in capturing illegal immigrants. Unfortunately, they do not, which labels them as hypocrites as they only accept "above the law" when it suits their political agenda.

Frankly, the Democrats' insistence that nobody should be "above the law" is laughable.

Listen to Tim on WZIG-FM (104.1) in Palm Harbor,FL; Or tune-in to Tim's channel on YouTube. Click for TIM'S LIBRARY OF AUDIO CLIPS.
Posted by Tim Bryce at 6:15 AM

Labels: florida, Palm Harbor, The Bryce is Right, Tim Bryce, WHO IS REALLY ABOVE THE LAW?