- For a short month, we stay rather busy. 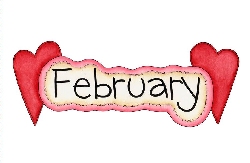 Even as a child, I always had a fondness for the month of February. It always seemed like the quirkiest month of the year. Maybe it is because it is the shortest month, or perhaps the first "R" in February is commonly pronounced silently. While seven other months have an extra day (31 in total), February was somehow shortchanged by two. Then there is the matter of Leap Year, which occurs every four years, whereby February picks up a day, yet is still less than all the other months. Imagine if your birthday was on February 29th, does this mean you only celebrate it every four years? One benefit would be your age would only be a quarter of what it is now, which would make me a teenager.

Other than the peculiarities of the calendar, February has some interesting days to celebrate:

Groundhog Day - this was my first indication that adults were truly mad. Why anyone would take their weather advice from a marmot was beyond me. The idea of the arrival of Spring was dictated by a groundhog is a bit much, even for a five year old. Yet, Americans seem to relish this day every February 2nd.

Super Sunday - for years, the Super Bowl was played early in January, shortly after all the college bowl games. Thanks to greedy owners though, the NFL championship kept getting pushed back until it finally settled on the first Sunday in February. This was probably done to give the players a couple weeks of rest until the next season begins. As an aside, I am old enough to remember the first Super Bowl in 1967 between Green Bay and Kansas City. As a fan of the old AFL at the time, I was disappointed until 1969 when Joe Namath and the NY Jets proved the viability of the league.

Valentine's Day - this too was an odd holiday for youngsters to learn. I can remember dutifully making Valentine cards in elementary school and having to exchange them with the girls in the class. I prayed they wouldn't get the wrong idea; after all, they had "cooties." Other than that, this holiday reminds me of the Valentine's Day Massacre in 1929 when Al Capone's gang "rubbed out" Bugs Moran's gang in Chicago. I found it interesting how they couldn't pin the assassination on Capone. The police disguises were also a nice touch.

Aside from the mobsters, we should all use Valentine's Day as a means to express our love and appreciation for others. It's important.

President's Day - is celebrated on the third Monday of the month and observes the birth of George Washington (Feb 22nd) and Abraham Lincoln (Feb 12th). This was an important date in grade school as it was used to teach us the significance of both presidents. As young children, we learned about Washington chopping down his father's cherry tree, crossing the Delaware River, surviving Valley Forge, and becoming the "Father of our Country." As for Lincoln, we learned he was an avid reader, a rail splitter, the President during the Civil War, and his assassination. We also learned the importance of his "Gettysburg Address." Some of these lessons may seem rather shallow, but we probably learned more about these men than most of the kids in high school today. Historians today question the cherry tree story, but it served as an effective lesson in morality.

For a short month, we sure stay busy!

Listen to Tim on WZIG-FM (104.1) in Palm Harbor,FL; Or tune-in to Tim's channel on YouTube. Click for TIM'S LIBRARY OF AUDIO CLIPS.
Posted by Tim Bryce at 6:15 AM