THE INNER BEAUTY OF WOMEN

- Which can be more alluring than just physical beauty. 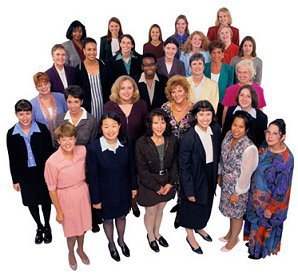 I want to speak for a moment on the beauty of women. No, I'm not a cosmetologist, dermatologist, hair dresser, or fashion coordinator, just an ordinary heterosexual with a fondness for the opposite sex. I always knew there were differences between boys and girls, but this didn't become obvious to me until I entered junior high school whereupon I noticed the girls were beginning to apply cosmetics, change their hair, and wear more fashionable clothes. I guess this marked the beginning of our mating rituals as the boys began to sit up and take notice.

It has been my observation over the years that women depend mostly on physical attractiveness to lure a mate. This is why millions, if not billions of dollars, are spent on beauty products for hair, skin, nails, eyes, lips, legs, even the scent of a women. Let us also not forget the enormity of the fashion industry which includes not just clothes, but shoes and hats as well. It is obviously a gigantic business. Some women are naturally beautiful, and know it. Others have to work at it.

I wonder though if women are too dependent on physical appearance and overlook the allure of a personality. Over the years I have met many women who may have lacked looks, but are incredibly sensual just from their personality alone. They may have a good sense of humor, an ease about them, a confidence, or something simply feminine. I guess they just feel comfortable in their own skin and know how to make others feel likewise. Perhaps this is the "feminine mystique" I've been hearing about all these years. I have seen women who know how to light up a room with nothing more than a smile and a gentle wave of their hand, yet are considered frumpy otherwise. Men gravitate to such women naturally as they are more approachable as opposed to a beauty with an incredible figure, simply because they know how to carry a conversation and make the people around them feel at ease.

Some people think such things as sex and cooking are part of the allure of women, and I suspect there are many men who think this way. As for me, such things are nothing more than the icing on the cake. Any relationship based on this alone is doomed from the outset.

Instead of spending tons of money on the physical aspects, I wish they would spend a little on cultivating a personality, something that can put men at ease, even be disarmingly flirtatious. Most men can be intimidated by a ravishing beauty, thereby considering them untouchable. After they have summoned up the courage to talk to such a woman, they are crestfallen when they find there is nothing behind the facade. Instead, they would rather be able to enjoy the woman's company, but if the lights are on and nobody is home, the encounter will be brief. I'm certainly not suggesting the woman be submissive to the male. In fact, I find that rather unappealing. The women who possesses a wit, a warm heart, an openness about them, a sense of humor, and confidence about themselves in spite of some physical defect can be much more interesting and stimulating than a glamour queen.

I guess what I'm describing is the "inner beauty" of a woman, which can be incredibly alluring, and I presume it is essentially no different for how women consider men. However, for those people who lack both an outer and inner beauty, I pray they're good in the kitchen or bedroom. Either that, or they begin to frequent a salon, gym or a voice coach. Otherwise they are going to remain rather lonely for a long time.