SOME OBSERVATIONS ABOUT THE SUPER BOWL 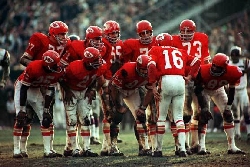 It shouldn't come as a surprise that I haven't been a fan of the NFL for the last few years. I think they have simply lost their way and become a dangerous masculine role model for youth to emulate. I have written about my displeasure on more than one occasion. Nonetheless, the latest Super Bowl was held just a couple of weeks ago, and I really wasn't interested. Instead, I watched Super Bowl IV from 1970 pitting the Kansas City Chiefs against the Minnesota Vikings. This was the last game before the merger of the American Football League (AFL) and the NFL, and held at the Sugar Bowl in New Orleans. I was in High School at the time.

This was an important game as KC beat the Vikings 23-7 and evened the series between the two leagues 2-2. This was an impressive game featuring some great players from both teams, but this is not what this article is all about. Instead, I want to discuss the differences between the Super Bowls in the early days versus those of today. A lot has changed.

There was no controversy over the playing of the national anthem at the beginning of the game, as performed by actor Pat O'Brien and trumpeter Doc Severinsen of NBC's "The Tonight Show." Nixon was president at the time, but there was no mention of not visiting the White House back then. In other words, the Super Bowl was not a place for political intrigue. Everyone was rather patriotic, but I digress.

On the field, there was only one significant rule change, no two-point conversion following a touchdown. I presume this was done due to some conflicting rules between the two leagues. Today, the two-point conversion is, of course, acceptable. I also noticed there were far less penalties than today. Either there were less mistakes back then or the refs didn't inhibit the play of the game as they do today (or both).

In terms of television commercials, General Motors bought all of the ads shown in the first half featuring their 1970 automobiles. This must have cost them a pretty penny, even back then. Today, it would be cost-prohibitive to so. In 1970 though, all of GM's brands were featured, including Cadillac, Chevrolet, Pontiac, Oldsmobile, etc. I remember all of these cars quite well, but found the ads rather amusing in terms of their story-line. Car buffs would certainly love watching these ads. The second half featured commercials for beer and razor blades.

As far as I was concerned, the most interesting part of the program was the half-time show. I had forgotten how the early Super Bowls handled this, and I found it most enjoyable. It wasn't a lame rocker singing lip-synced songs, but rather a big event put on by the City of New Orleans. Proudly leading the way was the Southern University marching band who put on an exciting display. This was followed by famed trumpeter Al Hirt, a favorite son of New Orleans.

This was followed by a re-enactment of the 1815 Battle of New Orleans, pitting British Red Coats against the Americans commanded by General Andrew Jackson. Here, in the Super Bowl, canons with blank rounds were used by both sides creating considerable smoke. An actor portraying General Jackson on a white steed commanded the Americans who turned the British back; making it a great little history lesson.

Next, was a simulated Jazz funeral as commonly found in New Orleans, and famous for this genre of music. Jazz legend Lionel Hampton played xylophone and was accompanied by Al Hirt and Doc Severenson, all of whom picked up the tempo and ushered in a simulated Mardi Gras parade, complete with balloons and a replica of a steam boat.

You could tell all of the participants were enjoying themselves as they proudly showcased their city. And that's really the point I'm trying to make; in addition to be a great show, it was an invaluable public relations tool for their city. It was so good, I would have paid money to see it as opposed to the half-time shows of today. It also speaks volumes of how our sense of entertainment has changed over the years. Most likely, critics today would argue it was "racist" or "sexist" which, of course, couldn't be further from the truth.

Frankly, I would love to see the Super Bowl return to this format, but it is highly unlikely this will ever happen as half-times now represent mega-bucks to sponsors, such as Pepsi. As much as I would like to see the entertainment performed by the host city, thereby creating a "win-win" situation, it will undoubtedly remain in the clutches of NFL owners.