THE BROUHAHA OVER PLASTIC STRAWS

- Haven't we got better things to do? 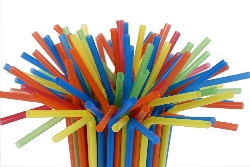 Over the last few months, the subject of plastic straws has become a political football, brought about by Democrats who contend they are not ecologically friendly. Not surprising, California was the first state to bring it to our attention. Since then, the subject has surfaced in a handful of cities here in Florida, most notably St. Petersburg, a stronghold for the Democrats. Last December, the St. Pete City Council passed a bill banning plastic straws, not the voters. This is related to their ban on Styrofoam which is commonly used by restaurants to save leftovers. As of this moment, you can only get a plastic straw in St. Pete if you ask for one, but the straws will be totally banned by 2020, and replaced by paper straws.

In my youth, I remember paper straws wouldn't last any longer than a small carton of milk. As to soft drinks, twelve ounces and up, forget it, they're useless. People would rather drink a soft drink directly out of a can, bottle or glass than using a paper straw.

The big question though, is the plastic straw a genuine problem? St. Petersburg is respectable in size and is listed as the fifth most populous city in Florida. During the winter months the city probably doubles in size due to the influx of "snowbird" tourists who enjoy the beaches and warm weather. St. Pete is also home to the Tampa Bay Rays, our MLB franchise. As such, there is a multitude of dining facilities in the area, large and small, all presumably providing straws to patrons.

The St. Pete council believes the plastic straw is an ecological threat to the beaches, but there is little, if any, proof that this is true. This begs the question, is this a political fad or is there any legitimate science behind it? So far, the answer appears to be "No." It is reminiscent of Obamacare and the "Green New Deal" legislation introduced by Democrat-Socialist Rep. Alexandria Ocasio-Cortez (NY) which is a laundry list of items to create a Socialist Utopia, but lacking specifics, such as the costs to implement her program and precisely how it will improve the environment.

Because of this, the plastic straw has become an iconic symbol of Democrats pushing their agenda without any science behind it. Such lunacy would not play well in corporate America where you must quantify the return on investment of a proposal. In other words, the Democrats are weak on doing their homework and are acting on impulse as opposed to fact. Instead, they package their ideas and allow the news media to carry the pitch to the public. Even more disturbing is the public is not truly being consulted on this issue which is commonly used by everyone.

Fortunately, cooler heads are prevailing at the state level in Florida where the legislature is drafting bills to prevent cities from outlawing plastic straws. If passed, this will supersede the authority of the municipal level.

This rhubarb over something as simple as a plastic straw is much ado about nothing. The Democrats have simply not made their case and makes me wonder, don't we have better things to do? It also disturbs me our government officials will entertain any hairbrain idea that comes along, particularly when it is not thought through and articulated properly. They could probably be more productive by counting the number of angels that can dance on the head of a pin.

We could save a lot of time, money and effort if legislators could learn to draft bills more intelligently, such as how businesses write feasibility studies, but I guess that is too much to ask.

To help in this regard, my next column will be, "The Elements of a Good Feasibility Study," which is intended to provide insight in the preparation of an intelligible proposal. Until then...