- This is for all of the voters up North. 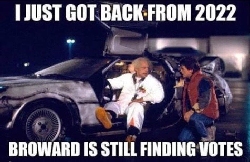 Knowing I write regularly on politics, as well as other things, I have recently been bombarded with calls, messages, and e-mails from acquaintances all over the world asking me about the Florida election recount. An old friend I know vacationing in southern Spain asks for daily updates. High School and College classmates from Ohio also ask me regularly, as are readers from throughout the Midwest, New England, and the South. I can't remember a time when so many people have been asking me about a single issue.

After asking for the latest update, the next question inevitably is, "Don't they know how to count down there?" It's interesting, from the tone of the discourse they would have you believe all of the people in Florida are bumbling idiots, not just because we cannot seem to count ballots, but because there isn't sufficient outrage to demand an end to this madness. I usually begin my defense of Florida by saying, "First, it's not my fault." Like all Floridians who voted, I followed standard operating procedures and assumed my County will tabulate the results correctly.

Prior to the Bush/Gore debacle of 2000, where punch cards were used, Florida also came under scrutiny and we had to endure the ridicule of "hanging chads," "dimpled chads," and "no votes." This seemed to go on forever and we felt the wrath of the American people. As I have been involved with Information Technology for quite some time, I happened to ask some election technicians I knew as to what was going on. They told me there was nothing wrong with the election technology back then and the problem wouldn't have surfaced had it not been such a close race. Then the attorneys and politicians got involved and blew everything out of proportion.

To make matters worse, the 2000 election caused Florida to abandon the punch card ballot, which was a cost effective method for tabulating results, and caused us to reinvent voting, not just once, but twice. Several million dollars later in new technology investments and we have the problems of 2018. I find it particularly hysterical when I hear election officials claim their tabulating equipment is "so old." They make it sound like it is something from the 19th century. Even the 20th century isn't that "old." The reality is, their equipment is probably no older than eight years at the most, and used just once each year. "Old?" Don't make me laugh.

All of this would suggest we need to once again reinvent the election methodology down here. Frankly, that is not the point. Regardless of the technology in place, if it is a close race, rest assured attorneys and politicians will find fault with it. Add to it, incompetence at the County Board of Election level driven by party affiliation, and you have a recipe for disaster.

Yes, there were other states who faced election recounts, but because Florida is an important "swing" state, the media spotlight is placed glaringly on us and we begin to suffer from a bad case of the stupids. This results in numerous political cartoons and jokes on the Internet poking fun at our inability to produce reliable computations, thereby making us the "laughing stock" of the country. Republicans are outraged by the moniker, Democrats couldn't care less as they desperately want their candidates to win the senate, governorship, and agriculture commissioner job. Yes, we all want fair elections, but we shouldn't try to change existing voting laws on the fly.

Counting ballots is not rocket science, but perhaps we should go back to manual counting since the advanced technology doesn't seem to be working. The reality is, it is working fine and it is unlikely anything will change in terms of who won the election. Maybe Florida should get special dispensation to hold the election 30 days prior to the normal election day as that seems to be the right amount of time necessary for us to count votes.

As I tell my friends up north, I do not foresee any changes in the outcome of the Florida elections. I'm just ashamed we came out of this looking like a bunch of huckleberries.

Just remember, its not my fault.