- Pre-voting is more revealing than any poll. 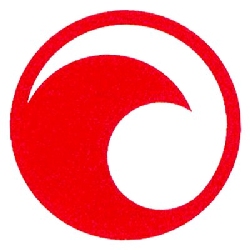 It's showtime for the 2018 midterm elections, where polls and media contend a "Blue Tide" is going to sweep across the country and the Democrats will reclaim the House of Representatives. After all, the press insists, "the party in power historically loses the midterms." The only problem is the media has never met a president like Donald Trump, nor do they understand the country's sense of priorities, where the citizenry prefers peace and prosperity over turmoil.

Certainly, we haven't already forgotten how horribly wrong the media and polls got it in 2016 by picking Hillary Clinton over Mr. Trump in a runaway election? These are the same people who are now predicting the "Blue Tide." Frankly, they are as wrong as they were in 2016.

In 2016, I accurately predicted the outcome of the election, not because I am a polling genius or possess some sixth-sense intuition, but because I simply studied the early voting data in Florida and saw the Republicans rallying to victory. I also knew Florida was an important swing state and realized, as Florida goes, so goes the country. I believe this remains true in 2018. In other words, I have found the early voting data produced by the Florida Division of Elections to be much more reliable than any poll I have come across.

Before we examine the 2018 Florida data, here are some assumptions I have learned over the years:

Here are the pre-voting numbers in Florida prior to election day: 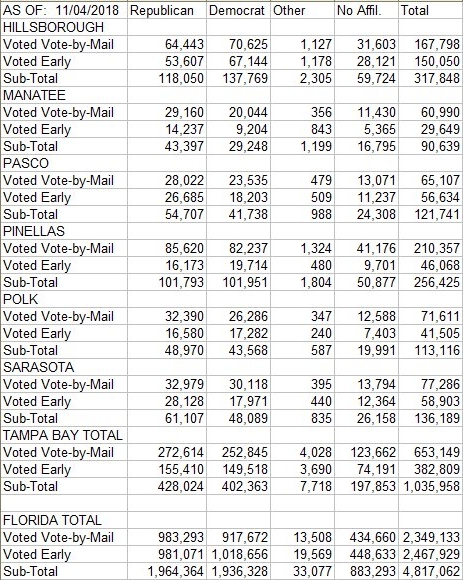 1. Pre-voting was approximately 60% of the votes cast in 2016.
2. The GOP is winning in Tampa Bay area and Florida overall.
3. GOP is running away with the Mail-In votes, Dems ahead in Early Voting (same as 2016).
4. Although "Other" party affiliations are lacking far behind, "No Affiliations" (Independents) show a strong turnout.
5. 42.1% of registered Republicans have already voted.
39.3% of registered Democrats have already voted.
Translation: Republicans are more aggressively voting than the Democrats.

The biggest difference is the total number of votes cast in Florida between Republicans and Democrats. The GOP took a commanding lead in pre-voting and never let go.

It is impossible to determine how independent voters are voting. Even if it is 50/50 Republican/Democrat split, the Republicans will win. However, we have to remember it was the independent voters who voted Republican in 2016. Floridians appear to be happy with our economic success, whereby the state is #1 in the country for Fiscal Responsibility, and #4 in the Tax Foundation’s State Business Tax Climate Index. Translation: they prefer peace and prosperity over turmoil and confrontation.

What does this all ultimately mean? There will be a "Red Tide" in 2018, not blue. Ron DeSantis will win the governorship, and Rick Scott will be our next U.S. Senator.

And as mentioned, "as Florida goes, so goes the country." If this is so, it appears the Republicans will maintain control over the House, and will pick-up some Senate seats (I'm estimating five). When this election is over, the media, the polls, and the Democrats will once again wonder "What happened?" And as usual, they will have misunderstood the will of the people.