- What did I learn from this election?

Coming from the business world, I understand the importance of conducting a Project Review (aka, "Project Audit") whereby we make note of what went right and what went wrong. The intent is to pass these lessons on to others for the future. This is equally applicable to politics which is why I want to review the lessons I learned from the recent 2018 mid-term elections. This may seem a little dry, but it includes some important lessons for both parties to observe.

I have been keeping track of the voting numbers for two cycles now (2016 and 2018), representing Mr. Trump's rise to the presidency, and the ensuing mid-terms.

The first thing I learned is the national and local political polls are useless and do not reflect reality. Frankly, they are a joke. I do not know their selection criteria for conducting surveys, but whatever they are doing, it is horribly wrong. This was proven in 2016 and 2018. To this day, they would have us believe Gillum and Nelson are still up by six points (and Mrs. Clinton by double-digits). The people who run these polls should find another line of work.

I found the early voting data provided by the state (in my case, Florida) to be much more reliable. In studying the data from both elections, I found the following:

* Democrats win the in-person Early Voting votes. Republicans do not find this convenient as it interrupts their business day. 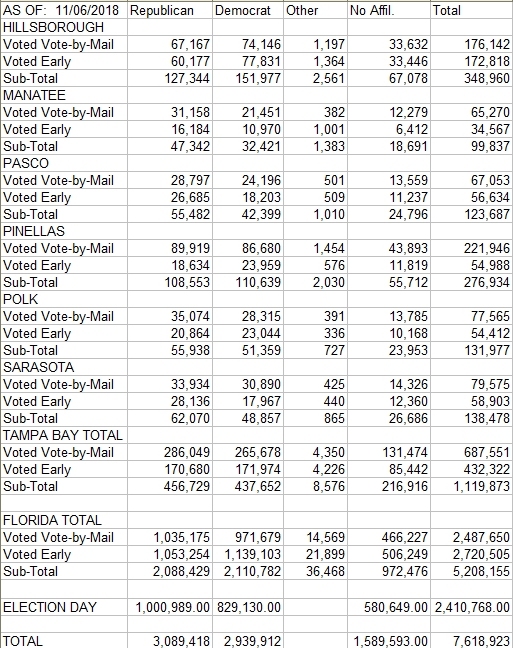 Turnout is ultimately based on the drumbeats of the parties. Whichever party can inspire their constituents to vote, wins. To illustrate, even though Florida Democrats had approximately 250K more registered voters than the Republicans, the GOP was able to get their members to the voting booth:

This resulted in 150K more Republicans voting than Democrats.

In the Tampa Bay area, I found:

This happened both in 2016 and 2018. Likewise, state-wide early voting resulted in a slim lead for the Democrats, but the Republicans outvoted them on Election Day by 171K votes.

Whereas large metropolitan areas voted Democrat, e.g., Tallahassee, Jacksonville, Orlando, Tampa, and Miami, all the rural areas voted strongly for the Republicans. For example, Republicans in tiny Citrus County, on the upper west coast of Florida, had 20K more votes than Democrats, thereby easily negating Jacksonville with +6K votes for Democrats. It was the rural and West Coast counties that carried the day for Republicans.

* Surprisingly, eleven of the twelve amendments to the Florida Constitution passed (#1 was the one defeated). Frankly, I was surprised by this. The only explanation I can think of is, due to the volume of legislation, people grew tired and simply checked off the "Yes" box in order to expedite their time in the voting booth.

* The campaign races were incredibly costly. I am told the Governor's race alone was the most expensive in our history. The Senate race was also expensive. Even the races for the State Senate and House were expensive. There was one State Senator who spent over $500,000 on his campaign. As you probably know, I consider this enormously frivolous. We should be spending the money on more worthwhile endeavors than the media.

* I was not made aware of any voter fraud down here, except for one instance where a non-citizen tried to vote and the Democrats wanted it accepted. Of course, it was disallowed. There was also concern about northern students attending Florida colleges voting twice (once here and once back home in the north), but I have heard nothing tangible about this. The same could be said for northern retirees who have a house in the South for winter.

* Following close races for the Senate and Governorship, there was a clamor to recall the votes. In the process, Broward and Palm Beach Counties came under scrutiny for possible election fraud and incompetence. Both counties are strongholds for the Democrats, thus heightening suspicions by Republicans. Full investigations are underway. I cannot remember the last time, if ever, an election was overturned here in Florida, including the famous Bush/Gore debacle back in 2000. Unfortunately, this proves our voting procedures are far from bullet-proof. Personally, I had no problem with the punch-card approach. Regardless, here is another reason why reforms should be enacted in our electoral process.

* There were a lot of close races, be it for the Governorship, U.S. Senate, County and Municipal races. Whoever won, be it Red or Blue, should be sensitive to this and realize the people will be watching their performance. Translation: They better get off their duffs and do something.

* The polarity of the country becomes more pronounced with each election. This is caused by differences in morality between the parties in terms of our perspectives as to what is right, and what is wrong.

Mid-term elections used to be as interesting as watching grass grow. Attendance was low. No more. The votes cast in Florida in 2018 were approximately 80% of those cast in 2016, an incredible figure. Thanks to the polarity of the country, the days of sleepy-eyed mid-term elections are long gone and we will continue to have massive political struggles from now on.