- The candidates stumble out of the gate. 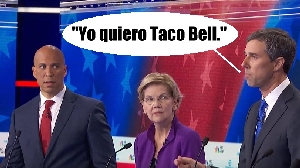 As I mentioned recently, the early caucus debates are reminiscent of the Triple Crown in Horse Racing; the Kentucky Derby has the biggest field, but it narrows down in the Preakness and Belmont Stakes. This is true in the current round of Democrat debates featuring 20 candidates, with others not appearing due to failed eligibility. All of the prime candidates were there in Miami which was split into two nights (June 26th and 27th) and hosted by NBC. A lot of it followed script, but there were some entertaining moments as well, including tweets from the president who was watching from far away in Osaka, Japan for the G20 conference.

As expected, there was the customary bashing of the president and the GOP, followed by trashing the record of the front-runner, former VP Joe Biden, who appeared to be somewhat stumped by the attacks. His biggest antagonist was Sen. Kamala Harris who challenged his civil rights record. This worked well for Ms. Harris, and bad for VP Biden who ended his defense by simply saying, "my time's up, I'm sorry."

Overall NBC did a good job of running the debate, but they seemed to lose control in the second night in terms of regulating the time limit of candidate responses. There was also a strange technical snafu on the first evening causing NBC to cut away to commercial prematurely. This prompted the president to tweet, "@NBCNews and @MSNBC should be ashamed of themselves for having such a horrible technical breakdown in the middle of the debate. Truly unprofessional and only worthy of a FAKE NEWS Organization, which they are!"

Some interesting quotes came out of the debates that either revealed the true character of the candidate or were just plain weird; for example:

Rep. Eric Swalwell tried to make a humorous comparison, "We can't be a forward-looking party if we look to the past for our leadership (a dig at VP Biden). I'm a congressman, but also a father of a 2-year-old and an infant. When I'm not changing diapers, I'm changing Washington. Most of the time, the diapers smell better." Unfortunately, this didn't play well in Poughkeepsie. Sayonara Rep. Swalwell.

During the first evening, there was an unexpected contest over who was the most proficient in the Spanish language between former Rep. Beto O'Rourke, Sen. Corey Booker, and Sec. Julian Castro. It sounded like they were auditioning to become the next Ambassador to Mexico. Isn't English our official language?

Overall, the debate focused on such topics as illegal immigration, the economy (which they contend only serves the rich), universal healthcare, and the rights of women and LGBT. During the debate, it became obvious the Democrats have become the party of "giveaways." They believe in open borders, the rights of illegal immigrants over lawful citizens, no fiscal or legal restraints, and they will not be satisfied until there has been a redistribution of the wealth; in other words, a socialist utopia. As I keep insisting, this is NOT the party of our father's generation. It has taken a sharp turn to the Left. Never before have the differences been so glaringly obvious.

As to nominating someone to honestly compete against President Trump, I didn't see anyone who could duel with him, the differences are so pronounced. Even NPR observed, "None of the candidates really made the case as to why they are best equipped to take the fight to Trump."

As for President Trump, he watched from afar and tweeted his observations:

And following Day 2, "All Democrats just raised their hands for giving millions of illegal aliens unlimited healthcare. How about taking care of American Citizens first!? That’s the end of that race!"
President Trump is correct with this last observation. The Democrats have painted themselves into a far-left corner. The American people will either buy into their concept of open borders, unrestrained fiscal responsibility, and the rights of illegals over citizens, or they won't. I'm betting they will not.

Next up, the Preakness will be held July 30th and 31st in Detroit and hosted by CNN. The candidates better bring some new material or they will be digging themselves a deeper hole.

Listen to Tim on WZIG-FM (104.1) in Palm Harbor,FL; Or tune-in to Tim's channel on YouTube. Click for TIM'S LIBRARY OF AUDIO CLIPS.
Posted by Tim Bryce at 9:58 AM