- Is this the right approach for maintaining relationships? 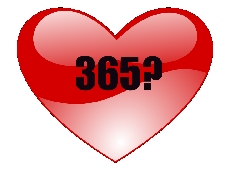 A few years ago, I read about a married couple in Tampa who agreed to engage in sex every day for a year. It seems they were trying to improve their relationship and commitment to each other, and even their church condoned it. I chuckled and turned the page, but I recently heard of other couples trying to do the same thing and posted their rationale on the Internet. One was even posted in "Good Housekeeping." Hmm...

Evidently, the concept here is to encourage romance and commitment among couples, particularly as we advance in years and we're past the kid stage. It seems some women have self-esteem issues after child birth and are concerned with they're attractiveness to their spouse. I suspect men are no different, but beer guts suggest otherwise.

According to the National Opinion Research Center, on the average, couples engage in sex about 62 times per year, a little over once a week. When you're young, you have no problem exceeding this number. However, as children come and middle-age sets in, we start to miss the mark, probably because we're exhausted and need to re-charge our batteries. It's not that we do not love our spouses, we do, but hard work and advancing age tends to burn us out and we are no longer on top of our game so to speak.

62 times a year is not a bad number to shoot for, but 365? Perhaps some knotty pine is required to reach such a lofty number. In the studies I read, there are testimonies indicating regular sex makes people happier, less angry, and less stressed. As Helen Fisher, PhD, a research professor at Rutgers University points out, "It's good for your health and good for your relationship. It's good for respiration, muscles, and bladder control. It's a fine antidepressant, and it can renew your energy." I believe Milk of Magnessia can do the same thing.

During my research on this, time and again I read where sex was treated more like a job as opposed to a true romantic encounter. Some commented they were simply going through the motions, and some were quickies. In other words, several were not genuine passionate affairs, yet it was claimed this enforced romance and commitment.

I have trouble with this analogy to work. On the job, I see a lot of people who don't know where they are going, don't know what they're doing, and afterwards didn't know where they had been, regardless of how many times they performed the same task. I wonder if this is the same approach they use in the bedroom? Then there are the problems of boredom, tardiness, absenteeism, poor performance and defects in workmanship. I'm sure there is little sexual craftsmanship going on if it is a regularly scheduled activity.

As much as I marvel at the concept of assembly lines in manufacturing, I do not see the romance in it. Here, I would rather build something unique as opposed to mass production. I guess what I'm suggesting is that sex should be more spontaneous as opposed to scheduled. The 365 day approach is an interesting concept, but I tend to see the repetition as dulling the experience.

It is true, relationships are something you have to work at, but not to the point it becomes mechanical (and meaningless). As to the physical demands of 365 at my age, I think I would be a dead man.