ILLEGAL IMMIGRATION: DO WE REALLY HAVE A PROBLEM?

- What the data tells us.

Earlier this week (Jan 2nd), Sec. Kirstjen Nielsen of the Department of Homeland Security (DHS) was asked to give a border security briefing in the Situation Room of the White House to ranking Congressional leaders, both the House and the Senate. Just six seconds into her presentation, Sec. Nielsen was interrupted by Democrats who wanted no part of it. Sen. Dick Durbin (IL) was quoted as saying the presentation was "preposterous," and "At a time when we have the lowest level of apprehensions at the border -- stopping people from coming in illegally -- the lowest level historically, she is saying that we have all these terrorists and criminals and all these people on their way in."

In other words, the Secretary's report was quickly dismissed as irrelevant and both parties took to the microphones to defend their positions. Whereas Sec. Nielsen reported an influx in arrests of illegal immigrants with criminal records during 2018, the Democrats responded this simply wasn't so. The question is, what is the truth?

The meeting was closely followed by the news media, but interestingly, there was no mention of the DHS report accompanying Sec. Nielsen's briefing. In short, it was buried by the press. Fortunately, I had little difficulty locating it on the DHS web site where it was titled, "Fiscal Year 2018 ICE Enforcement and Removal Operations Report" by the U.S. Immigration and Customs Enforcement. The purpose of the 22 page report was to summarize U.S. Immigration and Customs Enforcement (ICE) and Enforcement and Removal Operations (ERO) activities in Fiscal Year 2018.

Among the statistics listed were a couple of eye-openers: 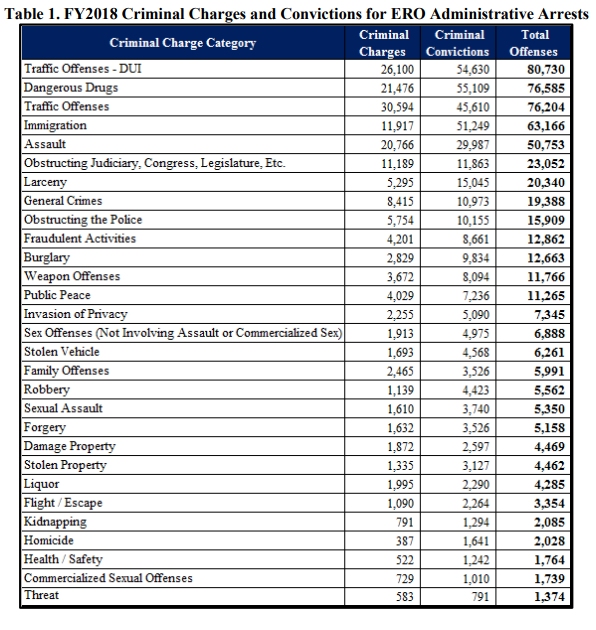 And finally, FY2018 saw an increase in criminal violations causing an increase in removal of illegal immigrants. Interestingly, the Top 10 countries include:

It's interesting that America provides substantial foreign aid to these countries, including:

One should ask what is the point of giving these countries money, if their citizens want to leave them. They are obviously squandering the money and not improving working conditions there. In other words, it is wasteful. Also consider this, the foreign aid to these Top 10 countries alone represents over $1.8B, not to mention the many other countries on the list. The United States probably could build an opulent southern wall by simply diverting foreign aid.

So, what was the message Sec. Nielsen was trying to communicate? That a legitimate problem exists in illegal immigration, and it is growing. The data presented in the report is not fictitious or a figment of someone's imagination. It is real. The fact remains, there is an increase, not a decrease in people wanting to enter our country illegally, with many possessing a criminal background. Now we have to ask if we want these undesirables to run amok in our country. Our safety, security, and sovereignty depends on your answer.