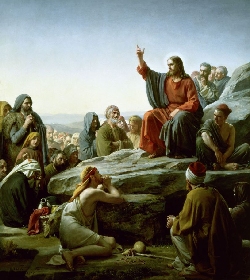 As many of you know, I have written on a wide variety of subjects over the years, everything from management and technology, to history, politics and life in general. Some of it is instructional, some political, some humorous, and others are simply observations of life. I have also written considerably on morality over the years, but little on organized religion, least of all Jesus Christ. I find people today are hesitant to discuss Jesus, and Christianity in general, as it has become politically incorrect to do so. There are a lot of Christians who tend to treat their religion very privately, and resist discussing it publicly. I wish to change this by stating my own beliefs.

First, let me openly say, I believe in Jesus and consider myself a proud Christian. I am familiar with many passages in the Bible, but I cannot say I have read it cover-to-cover. Yet, I remember the lessons I learned in church and various readings over the years. Do I believe Jesus existed? Yes, of course, there is certainly a lot of evidence to indicate his existence. Was he the son of God? Actually, I believe we're all the sons and daughters of God. The biggest difference was that Jesus possessed the word of God.

His lessons of love, morality and spirituality are well known and shaped the Christian sense of right and wrong for many centuries. For example, I marvel at the resiliency of the human spirit, our ability to feel empathy and help others, to seek pride in workmanship and be industrious. From this, I have learned to appreciate the wonders of Mother Nature and find its bounty inspiring; everything from the beauty of a lone flower, to crops, to the majesty of wildlife and our physical surroundings. It is all beautiful and humbling to witness. However, it is our ability to think and master complex problems in order to improve the human condition I find particularly rewarding.

As a Christian I am cognizant of the immortal part within us that shall survive the grave and which shall never die. I firmly believe this and see evidence all around us. For example, I remember the gentle humor of my maternal great-grandfather and the gentleness of his wife (my great-grandmother). I learned from my maternal grandmother the necessity of keeping one's mind sharp and busy, the work ethic of my paternal grandfather and the need to treat others fairly from my other grandmother. I embody these life lessons handed down to me through my family, as well as the many people I have encountered in my journey through life. Through me, their lives live on. I only hope I can competently pass these lessons on to my heirs and acquaintances.

I recognize we are imperfect creatures and susceptible to evil, which must be combated, and that religion has been the cause of death and destruction over the millenniums, such as the Crusades, the Inquisition, and today's confrontation with Muslim extremists. Such chapters in our history reminds us of our imperfections. Fortunately, Jesus taught us the necessity for atoning for our sins and the power of forgiveness.

Christianity is the world's largest religious group and can be found around the world. It has touched the lives of literally billions of people and played a substantial role in the development of Western civilization.

The United States would probably never have been founded had it not been for religious persecution. Here, we established a safe haven for people to practice their religion of choice, be it the many Christian religious sects, Judaism, Islam, Buddhism, and many others. Because the early settlers were European, this explains why Christianity played an influential role in our country's founding and development.

I am truly bewildered as to why Christians are scoffed at today. We have accomplished a lot even though we are certainly not perfect, after all we're only human, but I suspect Christians are ridiculed as we are perceived as some sort of political and religious threat.

I practice Christianity, others may follow another path, which doesn't bother me the slightest bit. However, I deeply resent it when people look down their noses at my religion and try to portray it as radical, dangerous, and leads to such things as racism and injustice. I am sorry but I simply refuse to accept it. Such discrepancies lies at the very heart of the teachings of Jesus, to love and accept.

Atheists and agnostics would have us believe religion is meaningless and anyone practicing it is not intelligent to know better. I, for one, am not so naive as to believe that the heaven and Earth were all created by accident. There must be a reason for us to exist. As for me, I like to believe it is to make the world a better place to live and for us to evolve as a species, to seek perfection for the glory of God. I am certainly not ashamed of my religion and am unapologetic for being a Christian.

I am also not so naive to believe that in the immensity of the universe, we are the only beings possessing the gift of life and thought, who must also be experiencing the same travails we are, be it ahead of our development or behind us. The prospect of meeting such beings in the future, to share information and prosperity, is intriguing.

All of this though, begins with a sense of religion, and in the eyes of Christians, the lessons of Jesus Christ. From my perspective, we were given the rare gift of someone to show us the way to grow and develop.

Yes, I believe in Jesus and I see no reason not to publicly declare my devotion, either here in print or in person. Actually, I believe we need more people to do so, and not be afraid of skeptics and political correctness. No, I will not whisper His name or hide my faith as the Jews were forced to hide their religion in Nazi Germany. By not publicly declaring our support for our beliefs, the lessons of Jesus are weakened and face erosion.

As an aside, over the years I have heard many different songs pertaining to Christ, be it Christmas Carols, Gregorian chants, and other songs from popular music. The one I particularly enjoy is "Oh Happy Day" by the Edwin Hawkins Singers. I remember when this first came out in the late 1960's. I have always found it to be a positive spiritual message confirming our belief in Jesus. It's just as applicable today as it was back then.