THE PROBLEM WITH POLLS 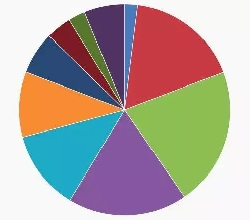 As this is an election year we are again being bombarded by polls from the media telling us how everyone thinks about meaningless issues and who has already won the election. 63% of my readership agrees that the media has gone overboard in conducting polls; and 20% believe they should be horsewhipped for trying to influence the election. Interestingly, 5.6% of Lithuanian readers in the Southwest believe I am just being an alarmist.

People who own Shar-Pei puppies in eastern Wisconsin generally like the media's news coverage, but Pit Bull owners in Teaneck, New Jersey have stopped watching television altogether. I also found 78% of Catholics in Western New York mourned the passing of Burt Reynolds, while 20% of those surveyed preferred green chilies with their eggs in the morning.

34% of the people polled thought President Trump's hair looked odd, while another 36% objected to Hillary Clinton's Chinese jumpsuits. Remarkably, a whopping 60% didn't know who Trump and Clinton were and thought Ronald Reagan should whip incumbent Jimmy Carter in the Fall.

There has been an 8% rise in young voter registration for the election this year, 12% of which speak Ebonics, 23% speak Spanish, and 65% were incapable of comprehending the English language. There has also been a 15% rise in voter registration around Chicago cemeteries.

36% of the readership thought the Washington Post was excellent for wrapping fish, but 25% preferred the New York Times for lining bird cages.

Perhaps the most interesting fact is that only 6% trust the media, including the polls. A whopping 27% think the publications and polls are run by uninformed nincompoops, and 58% believe they are run by Socialists with a political agenda.

The rest are undecided.