- We need to study all of our history, not just selected chapters. 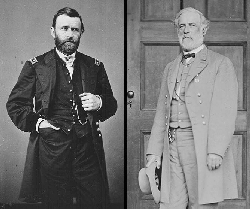 At a recent rally in Lebanon, Ohio (10/12/2018), President Trump happened to bring up the names of the two most famous generals of the Civil War, Ulysses S. Grant and Robert E. Lee, describing them both as "great." Liberals accepted Grant's name as he was the Union general, but were outraged for recognizing Lee as the commander of the Army of Northern Virginia.

Here we have another example of political correctness running amok in this country. Even NBC misquoted the President and was forced to apologize later, but the damage had been done. Liberals were incensed the President would recognize Lee at all, someone they bitterly viewed as a racist.

As I grew up in the north, I was taught the North had their generals, and the South had theirs. The emphasis was on their military tactics and strategies, not their politics. The Union won, the Confederacy lost, and a lot of people died in the process. We recognized the North had generals they were proud of, as did the South, and it basically ended there.

Now, in the 21st century, we are being taught by the Left to never discuss anyone in the Confederate States of America (CSA), as they were all allegedly racist. This is simply foolish as the War between the States, is an epochal event in the development of our country and there are many lessons to be learned. However, liberals would rather have us ignore it as the old racist attitudes of the South are too offensive by today's standards. I'm sorry, but burying your head in the sand is just plain foolish.

I would remind my liberal friends of a few simple facts about General Lee.

* When war broke out, President Lincoln offered Lee the command of northern forces. However, he turned it down as he couldn't go against his beloved Virginia.

* Lee had served as Superintendent of the Military Academy at West Point, where many of the cadets were trained and would later serve both the North and the South.

* Lee knew Grant through the Mexican-American War, when Lee was Major and Grant a Lieutenant. At the Appomattox surrender, the two chatted briefly of their days in that war.

* Arlington National Cemetery was Lee's home prior to the war. Following heavy losses after the Battle of the Wilderness, the U.S. Army Quartermaster commandeered Lee's home and buried the Union dead there.

* After the Civil War, Lee became the president of Washington College in Lexington, Virginia where he ably served for five years before passing away. To honor him, the college was renamed "Washington and Lee University" and this name carries forward to today.

Regardless of his position on slavery, militarily, historians agree he was a great general, having defeated Union forces many times, particularly in the early part of the war. He surrendered after his losses in the North, Union victories in the South, and the depletion of supplies, making victory untenable.

One little bit of trivia most liberals are unaware of is their beloved U.S. Grant, who went on to switch parties and become a Republican and 18th President of the United States, was a slave owner prior to the start of the war (while he was still a Democrat).

History isn't always pretty. In fact, it can be quite ugly, but we should study it nonetheless to learn its lessons and avoid making the same mistakes a second time. Instead, Liberals believe this ugly chapter of our history should be removed from the history books completely. This is censorship at its worse.

The Civil War was what it was. We cannot change it by political correctness or deleting chapters. We must look at it in its entirety, warts and all.

I'm just disappointed we have to keep fighting the Civil War over and over again.