- There are some significant differences between Eastern and Western management. 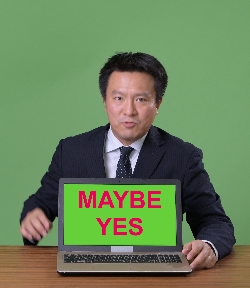 I have been to Japan several times over the years on business and have had the privilege of seeing Japanese work habits first hand, which are noticeably different than in the United States. As a small example, the first time I visited, I noticed that in addition to having Coke and Pepsi machines on a street corner, there were also beer and whiskey machines. I discovered the Japanese were not worried about their youth getting alcohol from the machines as it would cause their families to "lose face" through embarrassment. If we had such machines in this country, they would probably be emptied by our youth faster than the vendors could stock them.

Aside from this though, there are a few other differences I observed in corporate Japan:

* Japanese do not like to say "No" to someone as they do not want to offend the person. Instead, they tend to say, "Maybe Yes," which, when translated, means "No." This is similar in intent to the American habit of saying, "I'll try to make it" (to a meeting or appointment), yet never do.

If the Japanese nod their heads in the affirmative, it only means they understand what you are saying but they don't necessarily agree with you. Because of this, it is not uncommon for American businessmen to fool themselves into believing they are being successful when they make a presentation in Japan. In reality, the Japanese understood the presentation but need time to digest and discuss it among themselves. If an American asks them something like, "Was I correct in this regards?" If they answer, "Maybe Yes," the American is in trouble.

* I have been in a few large offices in Japan where I have seen young employees suddenly jump up on their desks and give a five minute speech on why he/she is proud of his company and what a pleasure it is to work with their coworkers. When finished, the rest of the office politely applauds before returning to their work. I wish I could say I have seen this in the United States, but I'm afraid I cannot.

* It is not proper for an employee to be insolent and openly criticize his superior. Knowing this may lead to pent up frustrations, some companies have small closet-sized rooms where the disgruntled employee can go into, close the door, and quietly beat an effigy of the boss with a bamboo stick. It may sound kind of silly, then again, you don't hear of anyone going "postal" in Japan either.

* It is still important for the Japanese to reach a consensus on any significant decision. This process may take some time to perform, but they want to emphasize team building and inclusion of employees in the decision making process. In other words, you do not see too much in the way of "micromanagement" over there.

* When you join a major company in Japan it is common to first "pay your dues," whereby you and your "class" (those who joined at the same time) are put on the same employment level and work for ten years, after which it is determined who the hard workers are and reward them with a major job promotion. If you didn't work hard, the company won't necessarily fire you, but your advancement in the company is arrested. Nonetheless, the emphasis here is on teamwork and creating a spirit of cooperation.

In the United States though, things are a little different...

* Americans are not afraid of offending anyone. So much so, that "Hell No!" (or stronger) is a natural part of our vernacular. Unlike the Japanese who digest something before speaking, Americans do not hesitate to tell you whether they agree with you or not.

* Rarely do you find an American employee who is steadfastly loyal to his company. Instead, it is more likely he will start an anonymous blog to bitch about his company and slander the character of the boss and his coworkers.

* Americans tend to vent their frustrations more publicly than the Japanese. For example, you might get attacked in the company parking lot, or someone may pull a gun out and start shooting.

* Instead of group decision making, Americans prefer rugged individualism whereby decisions tend to be made unilaterally as opposed to seeking the counsel of others. Consequently, employees tend to undermine any decision which is jammed down their throats.

* When you join a major company in the United States, you are rewarded more for individual acts as opposed to team playing. This results in a never ending game of scratching and clawing your way up the corporate hierarchy. Obviously, this approach promotes interoffice politics and cutthroat tactics as opposed to a spirit of cooperation.

Why the substantial differences? Primarily because Japan is a homogeneous culture, and the American "melting pot" is heterogeneous which includes people of all races, faiths, and beliefs.

Although the differences between east and west are noticeable, things are slowly changing in Japan, whose youth have grown up with the Internet and are starting to emulate the work habits of their counterparts in the west. In other words, instead of observing courtesy, honor and respect, Japan is slowly becoming Westernized and I fear that some time in the not too distant future "Maybe Yes" will mean nothing more than that.