A NEW CONTRACT WITH AMERICA

- How the Republicans can take back the House. 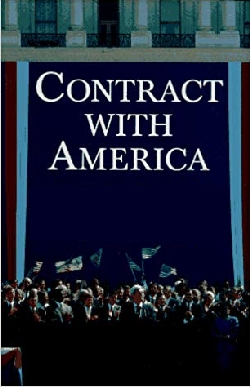 The Republicans have a problem. They botched control and lost the House of Representatives to the Democrats. This was not surprising as they did not inspire public confidence and their leadership was sorely lacking. I liked Paul Ryan as a member of the House but thought he was in over his head as Speaker. Americans saw it as nothing more than, "same old, same old," and voted them out. Had the Republicans been more aggressive and demonstrated some unity, they would still be in control. They plain and simply did not, and this is an important lesson for the Senate to observe as well.

The 2020 elections are not far away, but the GOP will not re-take the House unless they can demonstrate they have their act together. Fortunately, the Democrats are working overtime to shoot themselves in the foot. Although they typically vote in a unified manner, the House Democrats are splintered between moderates and the zany far-Left. They offer no platform other than Socialism and Trump-bashing, believing this will carry them to victory next year.

The American public however is tired of the hateful histrionics and desperately wants to see the country tackle real problems, thus presenting the Republicans with a golden opportunity, namely: a new Contract with America.

The first Contract with America was written back in 1994 by Republican Representatives Newt Gingrich and Dick Armey. It was positive and upbeat, and the public took notice thereby allowing the GOP to finally retake the House, under a Democrat President no less (Bill Clinton). To their credit, they followed the contract and made sweeping reforms.

This is just the type of thing necessary for the Republicans to take back the House and secure their position in the Senate. If they were to introduce a new contract, it would go a long way to re-instilling confidence in the party.

We do not lack for areas to address in a new contract; immigration, health care, infrastructure, lobbying reform, term limits, reducing the debt, election reform, energy and environment, all come to mind immediately. This would show true initiative, something the Democrats are incapable of producing at this time. They only want oddball things to secure their control over the government, such as eliminating the Electoral College, changing the number and tenure of Supreme Court justices, lowering the voting age to 16, give illegal immigrants the right to vote (and collect social security), and The New Green Deal (aka, the "Socialist Manifesto").

To make a new Contract though requires leadership, a la Newt Gingrich, but I am afraid I do not see this yet in the Republican House ranks, except possibly coming from the House Freedom Caucus. A new contract is nice, but new Republican leadership is needed to make it happen. Milquetoast candidates need not apply.

Again, a new Contract for America is a golden opportunity to re-take the Congress and actually do some good for the country. Let the Democrats desperately squawk about President Trump all they want. While they turn the country off doing this, the Republicans could create a contract with substantive legislation. The Far-Left won't be interested, but most of America certainly will, at least those who want to see our Congress return to work.

Should the Republicans fail to produce such a compact, they will be admitting they are nothing more than a part of the Washington "establishment," and don't deserve our votes.