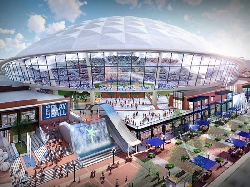 I have always found it interesting the amount of money the public invests in sports venues. Most of us are unwitting pawns in financing the various arenas and stadiums around the country, often paying substantial increases in taxes to support them, even when we have absolutely no interest in them.

Let me give you an example, coming from Cincinnati, I remember when they finally closed and razed Crosley Field, the iconic home of Reds baseball, which stood for 58 years and was originally constructed for $225,000 ($5.71 million in 2017 dollars). In 1970, it was replaced by Riverfront Stadium, a multi-purpose stadium for the Reds, the NFL's Bengals, and a variety of concerts. It cost less than $50 million to construct and the public was assured the stadium would last well into the 21st century. This was simply not so. In 2000, the Bengals moved into Paul Brown Stadium at a cost of $455 million. In 2003, the Reds moved into the Great American Ball Park at a cost of $290 million. In other words, a stadium constructed at a cost of $50 million lasted only 33 years and was replaced at a cost of $745 million, all paid for by Cincinnati tax payers.

In other words, a larger stadium constructed in 1990 for $130 million, and still in sound condition, will be replaced by a new one for $892 million, almost seven times the cost of Tropicana. Since 1967, Tampa Bay will have paid over $1.3 billion for professional sports venues.

I find this "disposable" way of thinking regarding sports venues to be disturbing as there appears to be little consideration for upgrading existing facilities at far less cost. By comparison, Tampa Bay's investment in such facilities, makes Cincinnati's costs look like a bargain. The reality is both cities are practicing obnoxious economics, with the tax payers picking up the lion's share of the costs. The teams themselves pay a mere pittance by comparison. The reality though is the consumer pays twice for the stadium, once for inflated ticket prices (and accompanying high priced beverages and food), and a second for increased taxes, particularly sales. Some claim this is the price of progress. I call it wasteful inflation.

We're all aware stadiums have been used by sports teams to blackmail cities, whereby the teams demand new lavish facilities or threaten to move to another city. Consequently, cities feel compelled to pay the ransom. In the NFL, we saw this in Baltimore, Cleveland, Houston, Los Angeles, St. Louis, and Oakland. In Baseball, we've seen it in Boston, Philadelphia, New York, Kansas City, Milwaukee, Montreal, and Washington, DC. And we've seen it in Spring Training facilities here in the Tampa Bay area.

To sell the concept of a new sports venue to the public, proponents boast how it will invigorate the local economy. How? By local restaurants, hotels, and air travel? Souvenirs? Parking? No, let's quit kidding ourselves, the only one prospering is the team. To prove this, a 2015 study was performed by the Mercatus Center at George Mason University, finding there is little evidence professional sports franchise venues lead to significant economic benefits.

One of the principals of the study, Dennis Coates, Professor of Economics at the University of Maryland wrote: "If the local government is looking for a policy to foster economic growth, far better candidate policies exist than those subsidizing a professional sports franchise."

In a separate report, "Do Economists Reach a Conclusion on Subsidies for Sports Franchises, Stadiums, and Mega-Events?", Coates wrote: "We have seen that economists in general, as represented by Whaples’s survey (2006), oppose sports subsidies. Economists reach the nearly unanimous conclusion that “tangible” economic benefits generated by professional sports facilities and franchises are very small; clearly far smaller than stadium advocates suggest and smaller than the size of the subsidies. The fact that sports subsidies continue to be granted, despite the overwhelming preponderance of evidence that no tangible economic benefits are generated by these heavily subsidized professional sports facilities, remains a puzzle."

It seems rather reckless that sports venues are given carte blanche by cities to support their teams. Let us remember, all of the major leagues are well financed and deal with millions of dollars, be it Major League Baseball (MLB), the National Football League (NFL), the National Hockey League (NHL), the National Basketball Association (NBA), the Arena Football League (AFL), Major League Soccer (MLS), and more. I have a problem asking John Q. Public, who makes an average salary of $56K, to sponsor teams and players making millions of dollars.

Evidently I am not alone, as there is the "Americans for Prosperity," a political advocacy group in the United States funded by the Koch brothers (David and Charles). According to their web site, "We protect the American Dream by fighting each day for lower taxes, less government regulation, and economic prosperity for all." Their local contact in Tampa Bay is Demetrius Minor, (727) 270-1407 - dminor@afphq.org - @dminor85

Since they are concerned with fiduciary responsibility in government and the lowering of taxes, the group is well aware of the zealous over-spending on sports venues and wants to protect tax payers. To find out more, look them up on the web at: https://americansforprosperity.org/.

One last thing to consider:

* In 2026, just three years after the scheduled opening of the new Ybor field, Amalie Arena will be thirty years old and past its prime.

Who is then going to foot the bill for new stadiums? The teams? Hardly. Like it or not, we are trapped in a vicious cycle. We can either sit back and take it or fight back. It's your choice.