MAYHEM IN THE WHITE HOUSE? 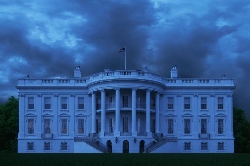 The Democrats have a dilemma. They are rapidly approaching the 2018 midterm election and have nothing to offer the American voters other than a Socialist agenda featuring universal health care at an estimated price of $32.5 trillion. They know this will not play well in Poughkeepsie as Americans are not comfortable with Socialism. As such, they are desperately trying to divert attention away from their frailties and attack the president instead, declaring him mentally unstable thereby making him unfit to fulfill his duties.

To this end, the Congress has brought up the concept of impeachment and enactment of the 25th Amendment which would represent nothing less than a coup de tête. The main stream media has also been doing their part by scrutinizing every word the president says, writing fallacious accounts of turmoil in the White House, such as the "anonymous" OpEd piece in the New York Times, and Bob Woodward's new book, "Fear: Trump in the White House," all of which claim senior staffers believe the president has lost his mind and they are operating at odds with him.

First, let's be clear, this goes well beyond slander and libel, it is playing politics with the Constitution which is recklessly dangerous and could backfire on the Democrats in November, making them even weaker than they already are.

As a first time politician, President Trump's approach to the job has been unquestionably unorthodox. We saw this in his campaign where he wasn't afraid to counter-punch his political opponents. His use of Twitter to circumvent the news media and his on-going feud with them is like nothing we have ever seen, nor his blunt negotiating tactics with foreign leaders. The news media was quick to accuse him of alienating our allies and putting us on a path towards war. Of course, this never happened, and we are working to denuclearize the Korean peninsula, we've opened a new embassy in the capitol of Israel, and we are now beginning to get better trade deals with other countries.

The left also demeans the president's accomplishments, such as the rising Gross Domestic Product, lowering unemployment, the influx of jobs from reduced taxes and bureaucratic red tape, economic prosperity, more secure borders, a re-galvanized military, and reforms to the VA. Next up, attacking the budget deficit. All of this is immaterial to the Democrats who declare him crazy in order to lay down a smoke screen to divert the public's attention. In a way, it is like the scene in the movie, "The Wizard of Oz," where the Wizard says, "Pay no attention to the man behind the curtain."

If President Trump is truly as mad as the Democrats claim, and I do not agree with their premise, than this country needs more of this madness in our government. The left's disapproval of his character is nothing more than an expression of how out of touch they are with the well-being of the country. Whether you like President Trump's character or not, you cannot deny his results orientation. It is his success that unnerves the Democrats as they realize the public is becoming more cognizant of his accomplishments. Hence, they demean his deeds and falsely paint a picture there is helter-skelter in the White House.

Think about it, the President is fighting not only the Democrats, but the news media, left-wing radicals, Never-Trumpers, and federal bureaucrats (the legendary "deep state"). Despite all this, he is winning. Not surprising, Independents and moderate Democrats are turning away from the New party of Socialist Democrats and gravitating to Republican candidates. The outcome of the November election will either show the tactics of the Democrats are effective, or the party will be in disarray.

As Trump says at his rallies, “It is a lot easier to act presidential than to do what I do.” Sounds crazy, right?