- People today do not appreciate the value of a high school diploma. 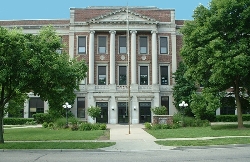 I want to talk a little on education. Some things have been bothering me. Today, we hear a lot of young people demanding a right to free higher education, or at the very least paying off their college debt. As I've said before, higher education should be treated as a privilege in this country, certainly not a right. So much is the push for college education, I believe the institution of America's public education system is under-appreciated. As I would remind everyone, we should be proud of our public education system. Could it stand improvement? Certainly, but that is only natural. You have to remember this institution ultimately represents our national personality and is the key to our future. As such, it should be prized and definitely not taken for granted.

First, a little history. In planning for the future, when additional states would inevitably join the union, the first Congress devised the Northwest Ordinance of 1787 which, among other things, included Article 3 stating, "Religion, morality, and knowledge, being necessary to good government and the happiness of mankind, schools and the means of education shall forever be encouraged."

This led to the public school system which was provided to all citizens. For the first time, parents were required to send their children to school, which was enforced by town magistrates. This was based on the premise education would lead to a spirit of community, national patriotism, and prosperity. It was founded on the belief education would develop better citizens and make them more productive.

In 1835, noted historian and political commentator Alexis de Tocqueville, a Frenchman, published his famous book, "Democracy in America," which was an analysis of our young country as compared to those in Europe. This was based on his travels through America in 1831 and 1832. The book, which is frequently referenced even to this day, contains his observations on the young country, everything from its geographical layout, to its culture, and particularly its new political system as a democratically elected republic, as opposed to a monarchy.

Tocqueville was particularly taken by the American public education system. He was amazed to see children as young as second grade be completely literate, something normally reserved for the aristocracy in Europe. He was also taken by how knowledgeable children were in the workings of the government as defined by the U.S. Constitution. He wrote, "It cannot be doubted that, in the United States, the instruction of the people powerfully contributes to the support of a democratic republic;"
Tocqueville was so impressed, he wrote the following, "But it is in mandates relating to public education that, from the outset, the original character of American civilization is revealed in the clearest light."

I believe we have forgotten the purpose of public education, which is to learn lessons, not just memorization for the purpose of testing. One key component missing is to teach young people to "learn to learn," which leads to a lifetime of inquiry. Instead, we have developed a generation who do nothing more than "learn to test." This is one reason why I am not a proponent of Common Core. It is more important to teach the student to think and endeavor to find an answer as opposed to simply programming the person.

There was a time when we used to prize a high school diploma, that it meant something important. During the Great Depression of the 20th century many people had to drop out of school to go to work to help support the family. To them, a high school diploma was a prized possession, as was a junior high school diploma. The idea of attending college was simply out of the question.

Today, college has been sold to us as the natural next step in our development, that we cannot succeed without it. This explains why young people believe they have a right to it and should be free. However, I believe high school guidance counselors have put too much emphasis on attending college. For example, trade schools are sorely needed today to teach fundamental skills such as plumbing, electrical work, manufacturing, tool and die, automotive, programming, etc. Not only are these skills very much in demand, they pay well too. However, counselors tend to pooh-pooh them, as well as a hitch in the military. Due to declining socialization skills, as well as morality and the family unit, the military provides the structure and sense of purpose many young people need, as well as basic skills. They also open the door to higher education at a later date.

Something else, I'm told a lot of teachers today hold a degree in education, and not a specific field of study, such as history, English, or a branch of science or math, etc. As such they rely on videos to explain a lesson, followed by a quiz. It seems to me, without give-and-take between the teacher and the students, this is watering down the learning process.

One last note, as I believe our children are not properly learning American government anymore, I would like to see the Constitution taught in the classroom again, not as a quiz but as a dialog in order to engage the students. Sounds like a suitable question to ask politicians in the upcoming elections, doesn't it?