- What is really behind this panic created by the press? 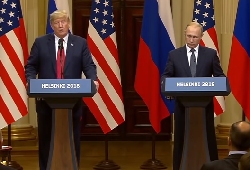 Ever since the Helsinki Summit last Monday (July 16th), people on-line, in person, and on the radio, have been asking me about the meeting between Presidents Trump and Putin. Specifically, what I thought about Mr. Trump's comments at the press conference afterwards, and was Mr. Trump a puppet of Mr. Putin. In a nutshell, it was all a huge media spectacle designed to distract the American public.

First, I do not consider Russia our friend or enemy, someone we are about to engage in war. I believe Mr. Trump was correct in labeling them our "competitors." He also noted how the relations between the two countries have soured to the lowest point in several years, which is why calling for a summit made a lot of sense at this point in our history. It's like two large dogs meeting each other for the first time to determine who will be the Alpha male; they have two choices, either attack each other viciously or sit side-by-side tending to their own territory. We obviously do not know the specifics of what was said in the summit itself, but it appears the two dogs are willing to sit side-by-side.

Prior to the meeting, the Democrats didn't want Mr. Trump to meet with Mr. Putin, claiming he wasn't qualified to negotiate with someone as intimidating as the Russian President. Of course, they also said this about the Singapore Summit, the G7 in Canada, and the NATO meeting in Brussels. Plain and simple, the talking heads of the main stream media do not like Mr. Trump and it is not in their vernacular to say something complimentary about him. In other words, they were all prepared to attack Mr. Trump regardless of what he said at the press conference.

I listened carefully to the questions asked and the one in particular that touched off the firestorm regarded who Mr. Trump believed was telling the truth about Russia's involvement with our 2016 presidential election, U.S. intelligence or Mr. Putin. After going through hours of in-depth discussions in forging a new relationship with the other big dog, the last thing Mr. Trump wanted to do was to provoke a fight in front of the cameras, which is why he answered the way he did.

This, of course, did not satisfy the press, the Democrats and the RINOS in Congress who accused him of being unpatriotic, a dupe, even "treasonous." One talking head even compared this to the Cuban Missile Crisis of 1962, something I do not believe the speaker actually lived through. Interestingly, I do not remember the same outrage in 2012 when a hot microphone picked up President Obama telling Russian President Dmitri Medvedev he would have more flexibility to negotiate on issues like missile defense after the election.

The outrage by the liberals today was Pavlovian in nature, causing their supporters to drool and cast doubt with voters. Is this nothing more than an example of the Trump Derangement Syndrome (TDS)? Maybe, but I tend to believe it is more insidious than this. The real intent here is to create a much needed smokescreen to divert attention away from America's booming economy as created by Mr. Trump. This is the Achilles Heel of the Democrats. To cover it up, the media is using the Helsinki Hysteria to cloud the issue so the American public is deliberately kept in the dark about the economy.

Think about it, the Gross Domestic Product is up, unemployment is down, wages are up, even Mr. Trump's tariffs appear to be working on countries like China, where their stock market has dropped 23%. The President's insistence on fair trade, and for NATO partners to pay their fair share, may seem callous at the time, but is beginning to work to America's benefit. Unfortunately, because of the poor press coverage, most Americans are unaware of the progress we have made, which is how the Left wants it.

This frontal attack on Mr. Trump by the media, the Democrats, and RINO's is intended to create fear thereby inhibiting how Mr. Trump conducts himself. This will continue unabated until the midterm election in November and probably beyond until he has been hounded out of office. So, the question becomes, should Mr. Trump change his style of management and curtail all other meetings until the election? Absolutely not; that would be worse than worrying what the opposition personally thinks of him. The nation must move forward, whether the opposition likes it or not.

The hysteria was not unexpected. In fact, it was all rather predictable.

Listen to Tim on WZIG-FM (104.1) in Palm Harbor,FL; Or tune-in to Tim's channel on YouTube. Click for TIM'S LIBRARY OF AUDIO CLIPS.
Posted by Tim Bryce at 9:36 AM