- Instead of legislating, they are attacking. 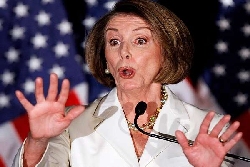 When asked about the recent problem of separating children from their illegal immigrant families, I burst out laughing, which didn't go over well with some people in the room who thought I was being insensitive to their plight. Of course I am sympathetic, but I realized this was just another soap opera manufactured by the Democrats. Separating children from illegal immigrants is certainly not new as it was done for at least the last two administrations. President Trump certainly didn't invent the law, he just enforced it. Democrat strategists are perfectly cognizant of this, but they desperately want to convince the American public the president is evil. As such, they have turned this into a huge photo op to try and demonstrate their compassion and the president's lack thereof.

We are now just five short months away from the midterm elections, and with each day it becomes painfully obvious the Democrats have no proposals for solving any problems. So, instead of working through the legislative process, they attack the president. Their mission is simple: keep the heat on President Trump, thereby defacing him and anyone associated with him, particularly Republican candidates.

The theatrics of the Left is rather entertaining as they can now produce crocodile tears on demand, quote Jesus to justify their position (someone they abandoned years ago), and claim outrage over the slightest disagreement. Their histrionics of pseudo-sympathy is all rather amusing but not the slightest bit credible. They may impress the main stream media, but the American public is not swallowing it.

In a recent Gallup Poll, Americans who are satisfied with the direction of the country has reached a twelve year high, going back to September 2005. In the survey, all age groups and genders showed a marked improvement, but in particular, independents showed an eleven point bump, making it bad news for the Democrats.

Since the Democrats have no policy or program to offer American voters, other than increased taxation and larger government, they practice attack politics, where character assassination is commonplace and identity politics is used to ridicule their opposition. From now until the November elections, the Democrats will spend little time legislating and more time attacking the president.

This is all being choreographed rather precisely. As soon as the public has grown weary of the illegal immigration problem, another "catastrophe" will emerge with considerable fanfare. The Democrats cannot win by attacking the economy, the military or veterans, so they will go after such things as the environment and the EPA, housing and HHS, or the FCC, FDA, or Department of Transportation. In other words, a systematic attack on the various government departments affecting our lives. The brouhaha du jour is all designed to generate hate against the Republicans. Again, the people are seeing through this as evidenced by the recent Gallup poll.

Do not ask the Democrats about the growing Gross Domestic Product, the decreasing trade deficit, the shrinking unemployment rate, or the diminishing number of people on food stamps. These are all indicators of a prosperous economy improving under the Trump administration, something simply not discussed by the Left.

The main stream media plays a large role in all of this and could easily clear up misunderstandings if they wanted to. The problem is, they do not want to. As an instrument of the Left they are complicit in the shenanigans of the Democrats. It is no wonder, the American public no longer trusts the media. As one of my readers recently said to me, a lawyer from Tampa, "We've stopped watching the mainstream media. They are becoming irrelevant, except as a foil to show our disgust."

The Democrat's Soap Opera in the media reflects a desperate party resorting to desperate measures. Regardless of how they spin it though, the American public is not buying into it. The Democrats, therefore, are only burying themselves by not offering viable solutions. Although the media would have us believe a "Blue Tide" is rising, the truth is the Democrats are facing a brutal disaster in November, one which will reshape their party for years to come.