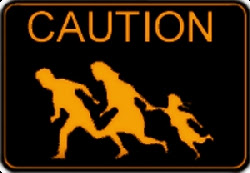 Currently, the federal government is preoccupied with talks regarding the federal debt and 2012 budget, two very important subjects that have overshadowed just about everything, including illegal immigration. Undoubtedly this will be an important issue in the 2012 elections. We may be distracted from it now but the problem is not going away anytime soon and does indeed impact our economy, and the next election. The left tries to trivialize the problem as they see illegals as potential voters, while the right is angered that our existing immigration policies and codes are not being enforced.


Several years ago our company wanted to bring an Australian and Brazilian to this country because they had special technical skills we needed. To bring them in, we had to jump through a lot of hoops and legal red tape. It was not easy. In 2010, Homeland Security reported the total number of persons legally naturalizing was 619,913. As an aside, the leading countries were Mexico (67,062), India (61,142), the Philippines (35,465), the People's Republic of China (33,969), and Vietnam (19,313). For the full report, see: U.S. Naturalizations: 2010 - Homeland Security (April 2011) 619,913 is an impressive number and is higher than years past, but it becomes rather insignificant when you consider there are 13 million illegals currently in the country. That's right, 13 million people.


Some would argue illegal aliens are needed to perform cheap labor. This is a rather naive argument as they are hardly "cheap". They may be paid less wages, but we all pay for the illegals one way or another. Among other things, they get free medical treatment and a free education that U.S. taxpayers pay for. Again, there are those who suggest this is but a mere pittance. Not really, and I do not believe most Americans grasp the magnitude of the costs involved. To this end, the Federation for American Immigration Reform (FAIR) prepared an in-depth report on this very subject and found we are paying a staggering $113 billion a year to support illegal aliens. That's right, $113 billion a year.


Let's break the $113 billion down further, FAIR contends $84 billion is absorbed by state and local governments. They go on to say, "Education for the children of illegal aliens constitutes the single largest cost to taxpayers, at an annual price tag of nearly $52 billion," which, again, is picked up at the state and local levels. If you are having trouble understanding why state governments are struggling to balance their budgets, you can now start to understand why. FAIR contends, "The annual outlay that illegal aliens cost U.S. taxpayers is an average amount per native-headed household of $1,117." That's right, $1,117 per household paying taxes. This doesn't leave much for our other important programs.


So, is illegal immigration really "cheap"? Hardly. Does it have a bearing on our economy? Absolutely. Also consider this, as FAIR points out, "Most illegal aliens do not pay income taxes. Among those who do, much of the revenues collected are refunded to the illegal aliens when they file tax returns." Whereas illegals have become wards of the state and capitalize on our generosity, they possess no allegiance to our country.


I certainly do not have anything against anyone who comes to this country legally and becomes a citizen. Rather, I have a great deal of respect for that person as he/she have had to learn our government, take a test, and be administered an oath of allegiance. In all likelihood, they will be better citizens than those who do not take the time to vote. However, I cannot fathom why we are tolerating illegal immigrants who come to this country only to exploit it. It is one thing to be kind, generous, and philanthropic, quite another to be naive and stupid. From this perspective, I believe it is every citizen's responsibility to report illegal immigrants to the authorities as they have become a parasitic burden on our society. That's wrong.


FAIR concludes their report by making an important observation: That the country is at a crossroads, "One choice is pursuing a strategy that discourages future illegal migration and increasingly diminishes the current illegal alien population through denial of job opportunities and deportations. The other choice would repeat the unfortunate decision made in 1986 to adopt an amnesty that invited continued illegal migration."


The 2012 election will likely determine which path we take.


Note: All trademarks both marked and unmarked belong to their respective companies.

Tim Bryce is a writer and the Managing Director of M. Bryce & Associates (MBA) of Palm Harbor, Florida and has over 30 years of experience in the management consulting field. He can be reached at timb001@phmainstreet.com


Tune into Tim's THE BRYCE IS RIGHT! podcast Mondays-Fridays, 7:30am (Eastern).