THE WAR ON TERROR 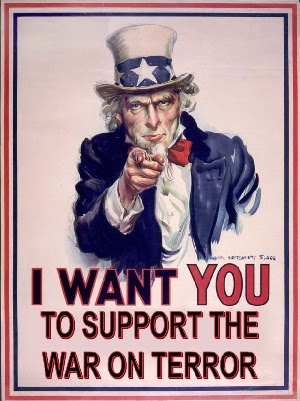 In the wake of the 9-11 disaster, I remember driving around with my son who was, at the time, still in middle school. I wanted to engage him in conversation to get him to think about what had just happened and what it meant to the United States. It was clear to me a new era of warfare had been born as a result of the tragedy, a type of warfare Americans still have trouble comprehending. As a nation, our perception of warfare is still of land, sea and air engagements a la the 20th century; e.g., the two world wars, Korea and Viet Nam. We have become rather proficient in traditional military maneuvers as demonstrated by how we brushed aside the Iraqi army, not just once, but twice.

The War on Terror though is unlike any other war we have fought. It has little to do with soldier versus soldier in the traditional sense. Our enemies know they would easily be annihilated in such a confrontation and, instead, have chosen to form a shadow army to fight behind the scenes by not only sniping at Americans but also trying to undermine their very existence. Some would say their actions are those of a coward. Maybe so, then again what alternative do they have as they are without the means to achieve a military victory.

More than anything, the War on Terror is an intelligence war. Whereas our enemies can easily find out what they need to know through the general media and Internet, our intelligence people need to dig deeper and harder to learn what our opposition is doing. This means the CIA is really our front-line, an often maligned agency of our government who a lot of people would like to see dismantled. Nothing could be more foolish. Prior to World War II, the United States had no organized intelligence body. It wasn't until after we were bombed at Pearl Harbor and found ourselves embroiled in a world war that we finally determined the need for such an agency, hence the birth of the Office of Strategic Services (OSS) in 1942, the forerunner of the CIA. Perhaps if we had an effective intelligence agency before then we could have averted the catastrophe that befell us on December 7th, 1941, but such is hindsight.

Such a war doesn't necessarily produce battle victories or body counts, which is how we have traditionally measured military success. These are tangible elements. Instead, the War on Terror deals primarily in intangibles. As such, it cannot be fought based on public opinion polls as the American public is not aware of how the war is being waged. This also means the public shouldn't expect any formal surrender ceremonies on battleships. The War on Terror is an ongoing conflict we will be embroiled in throughout our lifetimes. It's not that it is a no-win contest, it is simply a recognition that terrorism is the only form of warfare our enemies can engage in.

The next question should be rather obvious; how can each citizen help? Actually, we are already a part of it, whether we like it or not, as we are pawns in developing the mindshare of America. We need to fight drugs, thereby eliminating the cash flow to our enemies; we need to make our communities safe from crime, thereby causing funds to be channeled where they are really needed; we need to develop our moral character, thereby setting an example for the world to emulate, and; we need to make sure our government is working properly and operating under the right set of priorities. In other words, we need to practice basic citizenship again. We should not be so foolish as to believe our actions have no consequence, they do; we are all foot soldiers in the War on Terror whether we realize it or not. During World War II, Americans were all expected to pitch in and do their part. Now it is our turn, our time.

Remember this, one of the main reasons why the British lost in our Revolutionary War is not because they didn't have a superior army (they did), but because they couldn't adapt to a different form of warfare. Since we are all in this War of Terror together, we must all adapt or perish.

Tim Bryce is the Managing Director of M. Bryce & Associates (MBA) of Palm Harbor, Florida and has over 30 years of experience in the management consulting field. He can be reached at timb001@phmainstreet.com