ARE WE FORGETTING THE PLEDGE? 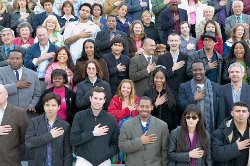 Like most of you, I learned the Pledge of Allegiance during grade school (aka, elementary). For me, I was pleased to stand by my desk, put my right hand over my heart, and recite the pledge with gusto. I found it to be a patriotic message and denoted my commitment to the country. I was pleased to do it, and still do so at several meetings I attend. As an aside, back then it was considered an honor to hold and present the flag before the class during the Pledge.

The pledge was originally devised in 1892 as a means to promote Americanism, something sorely needed at the time. Since then, it has been modified over the years, adopted by Congress in 1942, and the pledge we know today was finalized in 1954.

Today, I'm not sure people think of the meaning of the Pledge anymore, but rather recite it as a rote exercise. In other words, little thought goes into its meaning. I started to think about this recently and decided to dissect the pledge; here it is in its entirety:

"I pledge allegiance to the Flag of the United States of America, and to the Republic for which it stands, one Nation under God, indivisible, with liberty and justice for all."

1. The initial part, "I pledge allegiance to the Flag of the United States of America, and to the Republic for which it stands..." represents a commitment by the person to the flag as it is an important symbol or icon representing our country, more specifically, "the Republic." This is important as it clearly shows we are not a Democracy, but a Republic instead, something most young people fail to understand.

2. "one Nation under God" - the "under God" expression represents the last modification to the Pledge in 1954, and was intended to thwart communism, which practices atheism. This was a growing concern at the time as we entered the Cold War.

3. "indivisible" - meaning we stand united as a people, particularly in times of peril. I would like to believe this is true, but recent events dividing the nation casts doubt over the validity of this idea. Many people would like to see us divided and the country transformed into some other form of government.

4. "with liberty and justice for all." - this implies we are to be treated equally under the law and entitled to certain freedoms. It also suggests we respect the rule of law and apply it fairly and equitably.

The Pledge is one simple sentence consisting of 31 words (and 139 letters), yet it says a lot and the person who recites it should understand its meaning and not treat it frivolously as it is an expression of our belief in and commitment to the country.

Due to the freedom of speech and expression, citizens are not required to recite the Pledge, but willfully failing to do so suggests the person does not believe the contents of the Pledge and implies the person is anti-American.

As for me, I'm still proud to stand for my flag as I know it represents the overall Republic and the Constitution from which it is based. Reciting the Pledge is but one small way to show my respect and appreciation for this country. I, for one, do not take it for granted. God bless it.

P.S. - Also, I have a NEW book, "Before You Vote: Know How Your Government Works", What American youth should know about government, available in Printed, PDF and eBook form. This is the perfect gift for youth!

Labels: ARE WE FORGETTING THE PLEDGE?, florida, Palm Harbor, The Bryce is Right, Tim Bryce