- Who would have ever thought this would happen? 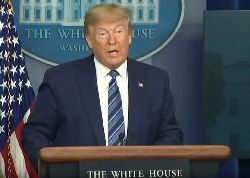 Panics are a fascinating subject, particularly from a management perspective. They are usually caused by some catastrophe, be it man-made or an act of God. We can make some preparations for disaster, but they do not normally accommodate all situations. This means we are forced to react to a panic, such as a cattle stampede triggered by a bolt of lightning. Instead of being proactive, we then must rely on our leaders to take the reigns to restore order and correct the problem.

Historically, Americans have reacted to many calamities, be it Pearl Harbor, Hurricane Katrina, or 9-11, to mention but a few. There were indications such disasters would occur, and some preparations were made, but nothing to the scale prohibiting the pain, suffering, and damage that occurred.

Now we are faced with a panic as created by the Coronavirus (COVID-19), a pandemic virus plaguing the world, and it appears nobody was quite prepared for it. In the United States, the Trump Administration took the lead and tried to calm the public's nerves while seeking medical treatments and keeping the country running as best possible.

Following Pearl Harbor, Katrina, and 9-11, the country unified to combat the peril, but this is hardly the case today. Even though polls suggest the country approves the efforts exerted by President Trump and his team, there are forces at work to undermine him. Through his daily coronavirus briefings, the president has commanded the headlines and air time. So much so, the country has somewhat forgotten the national election, and former VP Joe Biden cannot seem to be found anywhere. In other words, President Trump has enjoyed a tremendous amount of favorable publicity, while the Democrats have essentially dropped off the face of the Earth. Obviously, this does not sit well with their leaders as the elections are just seven months away.

To combat President Trump's exposure, the news media has openly criticized his daily briefings claiming they are either distributing misleading information or he is openly lying. Then again, they have been saying this ever since his inauguration. In sharp contrast, Democrat governors who hold similar briefings in their own states, are openly applauded; this includes New York, Michigan, Illinois, Washington, and California. So far, I have yet to see the press take the Democrats to task. Obviously, this is not a coincidence, as the media is splitting the coronavirus panic along ideological lines.

Even though the president couldn't be taken down by the Mueller investigation or by impeachment, the coronavirus makes a convenient last-ditch effort to take him out of the picture. Speaker of the House Nancy Pelosi (D-CA) is now in the process of creating a new oversight committee for the government's reaction to the coronavirus. This will be used to publicly criticize the president once again, and possibly find some excuse to impeach him. I highly doubt this Democrat-led committee will heap accolades on the president. Think about it, whereas people normally come together in times of crisis, the coronavirus is being used to impeach a president. It doesn't get any more political than this.

Interestingly, while the Democrat candidates seem to have disappeared, including former Sec. Hillary Clinton, the one Democrat the news media is fawning over is New York Governor Andrew Cuomo. It seems rather obvious the media has fallen for him and will desperately try to find a way to draft him as the party's candidate, perhaps as a dark-horse candidate or running mate with Joe Biden.

The only problem with this is the people are more concerned about surviving the virus, than impeaching or defeating the president. Again, the president is scoring well for his handling of the panic. In other words, the media's attacks on the president are not swaying the minds of independents or Republicans. It is simply not working, and the president's popularity continues to grow.

In a cattle stampede your choices are rather limited; lead, follow or get the heck out of the way, and two of those options will not solve the problem. So far, the American people, with the exception of the far-Left, believe the president is taking them in the right direction.

I never suspected someone would take a calamity like the coronavirus, and spin it for political gain. Imagine where we would be if we took this same approach to Pearl Harbor, Hurricane Katrina, and 9-11. Unfortunately, our country is hopelessly divided along ideological lines.

One last note, I recently came across a funny graphic on social media; it says, "I have a cure for the coronavirus: Just mention canceling the 2020 Presidential Election until 2024...See how fast it disappears." There is a lot of truth in this.

P.S. - Also, I have a NEW book, "Before You Vote: Know How Your Government Works", What American youth should know about government, available in Printed, PDF and eBook form. DON'T FORGET GRADUATION DAY. This is the perfect gift!

Listen to Tim on WZIG-FM (104.1) in Palm Harbor,FL; Or tune-in to Tim's channel on YouTube. Click for TIM'S LIBRARY OF AUDIO CLIPS.
Posted by Tim Bryce at 6:10 AM