- Why can't we build anything of substance anymore? 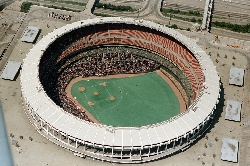 Cincinnati's Riverfront Stadium was opened in 1970. At the time, it was considered "state-of-the-art" and easily accommodated two professional teams as their home, the Cincinnati Reds (MLB) and Bengals (NFL). I lived in Cincinnati at the time and vividly recall the sales pitch presented the public. Not only would the stadium be large and spacious with ample parking, the structure would also be easy to maintain and modify to accommodate future considerations. For example, it was claimed the roof could be enclosed, thereby offering an indoor stadium safe from inclement weather. Guess what? The roof was never added, nor much of anything else. Although the stadium was structurally fine and in good shape, it was closed in 2002 and replaced by two separate stadiums, one for baseball and another for football, both at considerable expense to the taxpayer. Whereas Riverfront lasted just 32 years, its predecessor, Crosley Field, a stadium which was certainly no engineering marvel, lasted 58 years. The point is, Riverfront was an excellent example of planned obsolescence. Architects knew the stadium would be demolished and replaced before a nickel would ever be spent on its modification.

We see other examples of planned obsolescence just about everywhere: in our automobiles, where everything expires when the warranty times out; in our homes, which require constant upkeep, and; most noticeably in our electronic devices, particularly computers and cell phones which seem to be designed to self-destruct in about two years. Maybe we don't know how to design things to last anymore, but I tend to believe the consumers have been conditioned to think with a disposable mentality. We no longer try to build anything for the future, just for the almighty buck. It's no small wonder "quick and dirty" has replaced craftsmanship in the workplace.

Although we like to brag about our technology, I seriously doubt we could build anything as durable as the Great Pyramids of Egypt, the Great wall of China, Stonehenge, the Roman Colosseum, the Leaning Tower of Pisa, or the Taj Mahal of India. Even the great Hoover Dam, the Empire State Building, and the Golden Gate Bridge are under 90 years of age (the Brooklyn Bridge though is 136 years old). Is it because we lack the knowledge to build things to last? No, we simply lack the desire to do so as it is all about economics.

The classic 1951 comedy, "The Man in the White Suit," starring Alec Guinness, drives this point forcefully home. Guiness plays a researcher at a textile mill who invents a new type of thread that is indestructible and repels dirt. When both the mill's managers and the union workers realize Guiness' invention would ultimately cost them money in the long run (as people would not need to constantly buy new clothing), they go out of their way to undermine his discovery and sabotage his work. It's an excellent movie, and I particularly liked the ending.

I don't know about you, but it bothers me that we lack the ability to build anything of substance anymore. It sure doesn't instill any confidence in our civilization. As an aside, wouldn't it be funny if we learned that Cincinnati's Paul Brown Stadium and the Great American Ball Park, the two stadiums replacing Riverfront, were designed complete with places to plant dynamite charges to implode the structures at the end of their usefulness? I'm betting by 2030, the City of Cincinnati will pull the trigger on both stadiums. Boom! I guess it's "easy come, easy go" (with the taxpayer picking up the tab).