- No, it is not an educational institution, nor is it really difficult to understand. 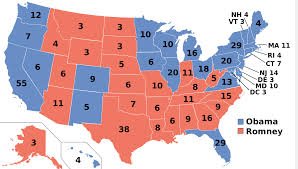 Note: As a candidate for president, Sen. Elizabeth Warren (D-MA) recently raised eyebrows by calling for an end to the Electoral College. The college was one of the most brilliant inventions our founding fathers devised in order to create equitable representation in presidential elections. Perhaps the senator is unfamiliar with the concept, or perhaps she knows it to be an impediment to her party's regaining control of the White House. Whatever the case, here is what are founding fathers intended:

The vote for President and VP is actually a vote for the electors of the state who will later cast the true votes. This is usually done in accordance with the wishes of the voters of each state. However, each state has their own set of rules for selecting electors and how they will vote. Their only restraint, from a federal perspective, is they can only appoint as many electors as there are members of Congress representing their state. For example, Florida has two US Senators and 27 members of the House of Representatives, for a total of 29 electors, none of which may be members of Congress. Since each state uses a "winner-take-all" approach, most electors are members of the winning party.

The "Electoral College" is not an educational institution, but all of the electors of all of the states in the union along with the District of Columbia, for a total of 538 electors and a minimum of 270 votes to elect a president. After each state ratifies its electoral votes, it is sent to the nation's capitol for counting in a joint session of Congress on January 4th. The official count is later filed in the National Archives.

The big question though is, "Why do we vote this way?" Many people believe a popular vote should suffice. Fortunately, our founding fathers thought otherwise. At the time of the writing of the Constitution, America was primarily a rural country. However, cities like Boston, New York, Philadelphia, Richmond, and Charleston, had substantial populations. Conceivably, politicians could have won the popular vote simply by winning these urban areas. This would have meant the interests of the rural areas would have been ignored, or whole states completely. To overcome this problem, the framers of the Constitution devised the Electoral College to maintain parity between all of the states, including both rural and urban areas. In this way, the college protects the rights and interests of all states, not just those with large populations.

To illustrate, in the 2000 presidential election, Al Gore won the large metropolitan states, but George Bush won more of the smaller rural states. Based on the number of electoral votes, Bush won the election by a razor-thin number of votes, six. This meant that the interests of ALL of the states were considered, not just the "swing states."

Following the 2000 election, then Senator-elect Hillary Clinton, feeling that Al Gore had been cheated of the presidency, called for the elimination of the Electoral College. According to Hillary, "We are a very different country than we were 200 years ago. I believe strongly that in a democracy, we should respect the will of the people and to me, that means it's time to do away with the Electoral College and move to the popular election of our president." (Nov 10, 2000)

Obviously, Mrs. Clinton fails to understand we reside in a democratically elected republic, not a democracy. Admittedly, most Americans misunderstand the concept of the Electoral College, thereby making it fodder for debate. Nevertheless, the electoral college remains a fair and equitable approach for representing the interests of ALL of the states in the nation, not just those with large metropolitan areas. Without the electoral college, the large metropolitan areas would decide the direction of the country, not smaller towns and villages. In other words, cities such as New York, Chicago, Atlanta, Dallas, San Francisco and Los Angeles would dictate the interests of the country, and not places like Des Moines, Scranton, Chillicothe, Morgantown and Macon.

Consider this, if an Electoral College did not exist, there would be little point in holding a primary in such states as Iowa, New Hampshire, North Carolina, Oklahoma, South Carolina, etc. as the candidates would only concentrate on the most populated states, such as New York, Michigan, Illinois, California, Texas, and Florida. Everyone else would be irrelevant.

It is not rational to discard or abandon something simply because we do not understand it.

Listen to Tim on WZIG-FM (104.1) in Palm Harbor,FL; Or tune-in to Tim's channel on YouTube. Click for TIM'S LIBRARY OF AUDIO CLIPS.
Posted by Tim Bryce at 6:25 AM