- Do you know the difference? 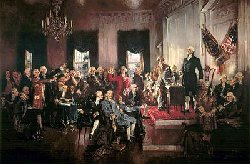 One of my pet peeves involving politics is when people misstate our form of government. Normally, I would claim this as the fault of uneducated young people, but many politicians, members of the press, as well as grown-ups are also guilty of this faux pas. No, we most definitely do not live in a "democracy," but a "constitutional republic" instead, as does most of the governments in the world.

In its truest sense, democracy means "Rule by the People," meaning a system of government whereby the populace votes directly on each and every issue. When you consider the voluminous number of bills and candidates to be voted upon, this is simply not feasible, regardless if we had the most sophisticated computer software to do so. Time should be allotted to deliberate on each piece of legislation and, to do so, would require citizens to devote most of their time to such study, and not tend to their own business.

This is why we elect politicians, to represent our interests so the populace doesn't have to vote on every bill, large or small, and explains why we refer to this as a "representative democracy," aka "republic." Here, the elected representatives are governed by a rule of law, such as a constitution, which defines the structure and responsibility of executive, legislative, and judicial tasks. Consequently, we call this form of government a "constitutional republic," which is a more accurate description of our government than "democracy." It should also be noted that under this form of government, the head of state is not a monarch, such as a King or Queen, which lends itself more to being a "monarchy" as opposed to a free-standing "republic."

Every now and then, we hear a politician or member of the media proclaim, "This (or that) is a threat to our democracy." This tells me they haven't a clue as to what they are talking about. Instead, they should have said, "This is a threat to our republic." Alas though, they do not.

The Democrats also have a problem with the name, particularly when they refer to themselves as the "Democratic" party. This too is incorrect. However, it is often difficult to describe the party, audibly or in writing, without making this common mistake. The term "Democracy" is so imbued in our culture, the Democrats try capitalizing on it to confuse the public, portraying the word "republic" as a constitutional threat to the country. Nothing could be further from the truth.

The Democratic Socialists of America (DSA) is now the largest socialist organization in the United States and aside from their far-left agenda, it is difficult to discern if they truly embrace democracy or a constitutional republic, I suspect the former.

Another commonly misunderstood area is the concept of the Electoral College in presidential elections, which is indirectly tied to the concept of "republic" as opposed to "democracy" by electing electorates (representatives) as opposed to a popular vote. By doing so, it provides parity between the interests of rural and metropolitan America. Frankly, the Electoral College is a testament to the sheer genius of our founding fathers as it encourages everyone to vote, not just large metropolitan areas.

Liberals believe the Electoral College is a threat to democracy, and it is reported as such by the press. In reality, they are correct as the College is intended to be used in a republic, not a democracy.

So, in a nutshell, No, we do not live in a democracy, in the truest sense of the word. We live in a "constitutional republic" and it is important all citizens understand the differences.

Following the writing of the U.S. Constitution, a woman approached Benjamin Franklin, who was one of the delegates and authors, and asked, "Well, Doctor, what have we got — a republic or a monarchy?" He coyly replied, "A republic — if you can keep it."