WHO ARE AMERICA'S FRIENDS?

- We want to believe we have many friends, but do we really? 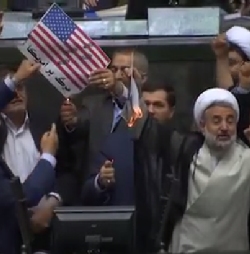 Have you ever been out to a large family dinner at a restaurant? Typically someone picks up the check for the entire party, such as a rich uncle. During the meal, he is kidded and listened to, but he is always expected to pick up the bill, with tip. It gets interesting when, one day, the family sits down at the table and the waiter asks who will be taking care of the bill at the end of the meal. The family is aghast when the uncle speaks up and says, "Separate checks." Suddenly, the uncle isn't quite so funny anymore, nor do people listen to him during the meal; in fact, he is ostracized and accused of being cheap. This pretty much describes America's relationship with other countries.

On May 8th, President Trump announced the United States was withdrawing from the Iran nuclear deal. This sent shock waves through our European allies as they had hoped we would stay in it, believing the Iranians would keep their end of the bargain and not develop nuclear weapons down the road. Mr. Trump didn't read it the same way and saw it as producing long-term problems. It must be remembered this agreement was never ratified as a treaty by the Senate as the Obama administration didn't want to see the Congress upset one of his landmark achievements.

Following America's withdrawal, protests were formed in Iran, American flags were burned, and "Death to America," was chanted by protesters and members of the Iranian parliament. Then again, this was also done when the agreement was first signed, so nothing has really changed; the Iranians never did like us, and probably never will.

This is another example of Mr. Trump's "Big Stick" foreign policy where we no longer cajole countries into trying to see things our way. Whereas other presidents hoped to entice countries into working together, Mr. Trump is more results oriented, likely because of his business background. Time and again he has been using his "America First" mantra as an intricate part of his foreign policy.
We have used the "carrot and stick" approach for many years, but what did we get in return, loyalty? Hardly. For example, in December 2017, the United Nations held a resolution disapproving of America's recent decision to move the U.S. Embassy in Israel to Jerusalem, something many past presidents had promised to do, yet failed to deliver. The vote passed 128-9 with 35 countries abstaining. Among those countries voting against the United States included our "friends," the United Kingdom, France, Germany, Japan, Belgium, Italy, Spain, Ireland, and the Netherlands.

Others also voted against the United States, including many receiving generous foreign aid from America, including:

In all, $21B was spent on foreign aid last year, which is used for such things as disasters, poverty relief, technical cooperation on global issues, including the environment, U.S. bilateral interests, and socioeconomic development. However, this does not include military aid which would probably double the figures shown. Yet, all of these countries voted against the United States, thereby creating an embarrassing moment for us.

If you study the individual donations listed here, which is only a partial list, one can only wonder if there is a better way of spending this money, particularly in our own country instead of giving it to our "friends." Don't we still have a national debt?

In refuting the resolution, UN Ambassador Nikki Haley said, "The United States will remember this day in which it was singled out for attack in the General Assembly for the very act of exercising our right as a sovereign nation. We will remember it when we are called upon to once again make the world’s largest contribution to the United Nations. And we will remember it when so many countries come calling on us, as they so often do, to pay even more and to use our influence for their benefit."

The Palestinian Authority has declared it will not with work the Trump administration in peace talks because of the Jerusalem decision, and will negotiate with other parties instead. Fine. I'm sure they will not need the $285 million they are currently receiving from our country.

Countries ask their rich "Uncle Sam" for money for a variety of reasons, such as to cooperate with American military policy, payola, and because they desperately need it. Whatever the reason, they have to learn to play ball with the administration. A vote against the United States, such as what happened at the United Nations, should be felt in the pocket book.

We would like to believe the European countries are our friends, particularly the United Kingdom. The truth is, it is a myth. Even Australia, Canada, Mexico, and the Philippines, long considered friendly to the United States, opted to abstain as opposed to rejecting the UN resolution outright. We should know by now, the other countries only want deals favoring their countries, and not our own. This is what Mr. Trump has been warning us about since he began to run for president. There is nothing wrong in helping others in time of need, but it should come with the stipulation they will support us in return. Otherwise, it is a Win-Lose proposition and as our president can tell you, the only good business relationship is when both parties prosper.

P.S., Be sure to see my video, "The PRIDE Renewal Tour," on YouTube.