IS RUSSIA OUR FRIEND?

- Have they ever been? 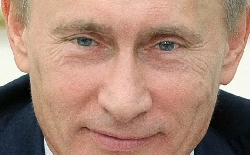 We've been hearing a lot about Russia these days, be it in congressional investigations, the Syrian war, in the Ukraine, and recent nuclear missile developments. The United States has a long history with the Russians, since its revolution about 100 years ago. In that time, our relationship could best be described as "tolerant" but certainly not friendly. This is due, in large part to opposing political ideologies. We simply do not trust each other and it is remarkable neither side has pulled the trigger to cause a major armed conflict.

During World War II Franklin Roosevelt and Joseph Stalin had a tepid relationship. America came to Russia's aid under the Lend-Lease Act to give them vital supplies to fight Nazi Germany. Stalin repaid us by snapping up Eastern Europe at the conclusion of the war and triggering the Cold War which lasted several decades. He also consolidated his power by purging his enemies in the country, not once, not twice, but three times. By doing so, he became the model for other Communist dictators to assimilate, particularly the North Koreans.

We all remember the relationship between John Kennedy and Nikita Khrushchev during the Cuban missile crisis which was the closest we came to war. Fortunately, Khrushchev blinked, but it cemented our adversarial relationship. It wasn't until Richard Nixon introduced the spirit of "detente" to Leonid Brezhnev that tensions began to ease and an Anti-Ballistic Missile Treaty was signed.

By the time Ronald Reagan became President, the Soviet Union was economically weak. Reagan began to rebuild America's military and surprised the world with the Strategic Defense Initiative (SDI; aka "Star Wars"), offering new technologies to prevent ballistic missile attacks. In turn, the Soviet Union was forced to compete militarily with the United States, which they could not afford to do. Further, Mikhail Gorbachev of the USSR introduced new policies at home with "glasnost" (openness) and "perestroika" (restructuring). All of this contributed to the end of the Soviet Union as a communist entity, and the end of the Cold War.

During the Clinton years, Boris Yeltsin became the first President of the new Russian Federation. Yeltsin proposed a new constitution which became popular and was passed. More importantly, he moved Russia's socialist economy to capitalism, and the country began to flourish economically. The Yeltsin administration though was fraught with corruption, eventually forcing the Russian president to resign.

Enter Vladimir Putin in 2000 to pick up the pieces. The former KGB foreign intelligence officer and Cold Warrior has served as Russian president for three terms and is now running for a fourth. As the Russian Constitution barred a third consecutive term, Putin took a term as the country's Premier (Prime Minister) until the next presidential election where he was reinstated, a clever maneuver allowing him to maintain control.

In theory, the Russian Federation is a Constitutional Republic, much like the United States, with three separate branches, including Legislative, Executive, and Judiciary. However, most experts agree it is no longer such as Putin has consolidated power and is essentially a dictator, much like Stalin except without the purges.

Putin has dealt with three American Presidents, George W. Bush, Barack Obama, and now Donald Trump. Putin and Bush generally had a good relationship. During this time, Russia cooperated with America in the War on Terror following 911. The two countries have cooperated in space, most notably the International Space Station, but in 2024, the Russians will take elements of their section to build OPSEK, a new and separate space station.

* In 2013, Russia gave asylum to Edward Snowden of the NSA who leaked classified information. This resulted in the cancellation of a Russian-American summit, the first time since 1960.

* In 2014, Russia invaded the Crimea, which led to the country being voted out of the G8.

* In 2016, Russia interfered in the U.S. presidential election.

Mr. Obama's policies towards Russia were generally regarded as a failure and Putin took advantage of the situation with bolder activities against the United States.

And now we come to the tenure of Mr. Trump and although the two have met briefly and spoke, they have not had a chance to negotiate policy. Just three short months into the Trump administration, the President ordered a missile strike against a Syrian airfield. 59 Tomahawk cruise missiles were sent in retaliation for the Khan Shaykhun chemical attack. The show of strength demonstrated the decisiveness of Mr. Trump to act, something well observed by Iran, North Korea, China, and Russia.

On March 18th, Russian voters will elect a president. Candidates include Putin as incumbent, and a handful of other token applicants. The only true candidate to oppose Mr. Putin is Alexei Navalny, who has been conveniently barred from running. In other words, there is little doubt as to the outcome of the upcoming Russian election. When his next six year term is over, he will have controlled Russia for 24 years, just six less than Stalin.

Even though the Russian Constitution claims the country is a republic, Mr. Putin's consolidation of power leaves little doubt the country is returning to a dictatorship. His roots are planted in the KGB and Communist Party which means he resents the success of the United States and considers us his #1 competitor for world domination as we represent a free country based on capitalism, unlike the Chinese which remains Communist. Consequently, it is to Russia's advantage to undermine America's political system and constantly test our resolve as leaders of the free world. If America fails, Russia wins.

If we have learned anything about the Russians, it is they respect strength and will exploit any weakness we may reveal. The only time we will get into trouble is when one country treads on the other's turf. Then we have a problem we must both address.

Although we have forged some good relations with the Russians over the years, are they really our friends and should we trust them? Hell no, but we better find a way to get along, for eveyone's sake.